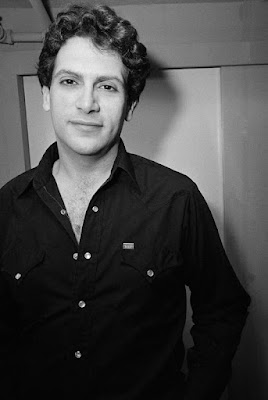 Actor, playwright, and librettist Harvey Fierstein was born on this day in 1952. Should I include female impersonator, or is that considered an actor? It's considered a performer and performing in the guise of a woman is what Harvey did, beginning at the age of 15, at various gay venues in Manhattan. There was acting out of drag as well, and since some of that acting was in improv, he realized so too he could write. After a painful breakup with a lover, Fierstein put his acting, writing, and crossdressing skills into the one-act play International Stud, which premiered off-off-Broadway in 1978. Two one-act sequels, Fugue in a Nursery and Widows and Children First! featuring the autobiographical character he created, Arnold Beckoff, soon followed. Eventually, Fierstein decided all three one-acts could be performed in a single night: 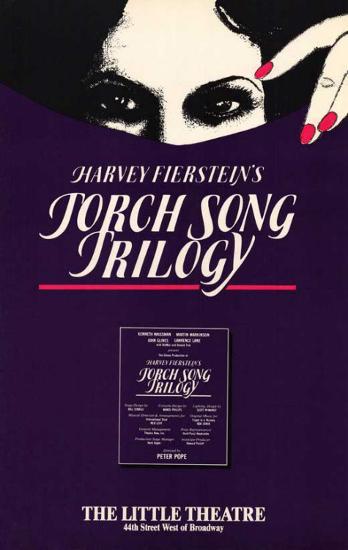 Running for 1,222 performances, the Tonys took notice. At this point I'd like to hand it over to Wolfgang Amadeus Skywalker:

Close your eyes and you can almost hear Froggy in the later Little Rascals/Our Gang shorts, but that's part of Harvey's charm. In addition to Fierstein winning Best Actor, Torch Song Trilogy won Best Play. One of the show's producers, John Glines, acknowledged in his acceptance speech his coproducer and lover Larry Lane, a first-of-a-kind moment for a televised award show.

In 1988, the four-hour play went on a crash diet and, its overall integrity remaining intact, became a two-hour feature film: 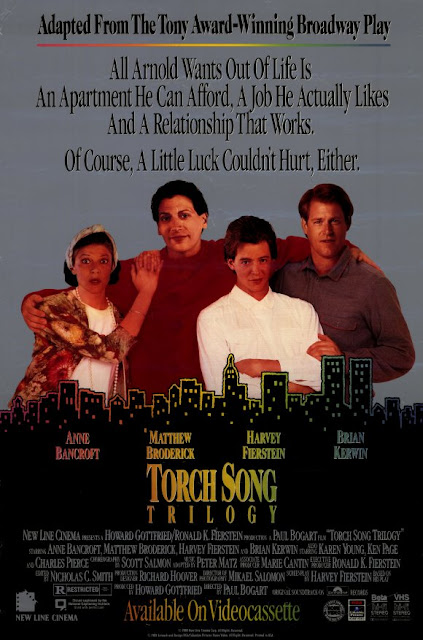 Ya gotta love advertising. Compare the movie poster above to the Broadway poster farther up. The latter's mascaraed, peekaboo eyes seem to promise thrill-seeking patrons of The Little Theatre a walk on the wild side. Hollywood, though, appears to want to take a different tack. The wry phrasing, the camaraderie that seems to exist among the quartet of people pictured, all of it shouts out FEELGOOD MOVIE! I don't think either poster quite nails it. As provocative as the general public may have found the subject matter back in the day, Torch Song Trilogy takes a matter-of-fact look at drag shows and gay hookups, echoing its characters casual attitude towards both. As to how you should feel while watching it, the story does end on a note of cautious optimism, but that's only after first going to a very dark place. But don't let that turn you off. As a comedy-drama, it has solid laughs throughout. And since everyone loves to laugh, that's very much what's emphasized in this commercial for the stage version:

That makes it seem like a farce. All that's missing is a door slamming. To be fair, the huge bed plays quite a prominent role in the second act, the funniest of the three, though I would hesitate to call this Bob & Carol & Ted & Alice x 2. The trailer for the film version tries to restore some sense of balance between the comedy and the drama, but not at the expense, as I said before, of feeling good:

It skipped over the murder. Ya gotta love editing.
None of this is meant as a criticism of either the stage or film versions. I'm only pointing out how hard it can be to categorize (and market) the uncategorizable. But then that holds true for the LGBTQ experience in general. 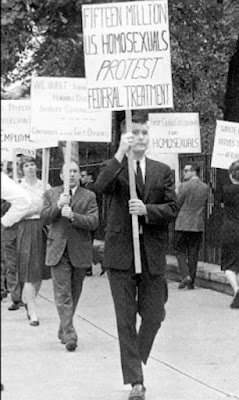 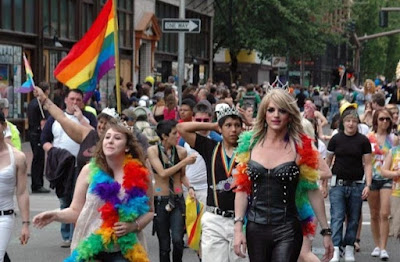 There's an ongoing debate in the LGBTQ community between those who may be called assimilationists and those who may be called subculturalists. At least I'll call them that. The assimilationists believe that outside of whom one chooses to sleep with, there's essentially no difference between gays and straights, and to avoid being marginalized, it behooves gays to be as much like straights as possible, be part of the hetero-hegemonic mainstream, with all the employment opportunities and suitable housing that comes with it. It's why some lesbians wear lipstick, why some gay men look and dress like lumberjacks, and why some gay members of both genders are Log Cabin Republicans. All kidding aside, assimilation was and continues to be one of the main arguments put forth for allowing same-sex marriage (of course, there are other, more constitutional reasons, such as equal treatment under the law, and more heartfelt reasons, such as the simple act of falling in love.) I don't know that gays who raise children do it for any other reason than a strong desire to be parents, but that too puts one on equal footing with straights (though minus the happenstance that works so well for the latter group, meaning a gay either adopts or, as an added option for lesbians, undergo in vitro fertilization.) The subculturalists counter that if it's so morally wrong to bend one's sexual orientation to the will of the majority, why is it so morally right to bend in every other direction that the majority insists, and rather than be part of some Reader's Digest social order, LGBTQ people should have their own bars, their own hangouts, their own shops, their own literature, their own clothing, their own hairstyles, their own slang, their own mannerisms, and everything else that goes into the making of an alternative lifestyle (or stereotype.) Leave the kids to the breeders, and as for holding down a job and having decent housing, hey, Li'l Nas is doing very well for himself these days (just as David Bowie did before he switched over to women.)

Because Arnold Beckoff yearns for a relationship that approximates marriage and has plans on adopting a teenage boy, Torch Song Trilogy has been described as a play and movie that argues in favor of assimilation. But I think it's more complicated than that. Back in the 1980s, and maybe even today, Arnold's flamboyant, effeminate personality and occupational crossdressing would have been a tad too subcultural for the mainstream, even if he showed up at the gate in a Dodge Caravan jam-packed with all the Family Ties, Growing Pains, The Cosby Show, Who's the Boss, Full House, Charles in Charge, Mr. Belvedere, Family Matters, Life Goes On, and Our House kids combined. Arnold wants some of what straights take for granted, but on his own terms, terms that go beyond mere sleeping arrangements. He inhabits that great space in-between assimilation and subculture. Because gays are like everybody else except in those moments, in and out of the bedroom, when they're not like everyone else. Gays are the same but different. In fact, gays are the same but different from each other (as are straights.) It's why an ongoing debate in the LGBTQ community is possible in the first place. The differences and similarities are there to be seen and heard in the stage and movie versions' opening monologue. The following is obviously the result of someone pointing a video camera at a TV screen, and at an odd angle at that. But it's not the full cinematic effect that I'm after--you wouldn't get that on a computer or cell phone anyway--but Harvey Feirstein's acting and writing prowess as he recites the lines that he himself wrote:

Throughout the course of the film version, Arnold is wooed by both Matthew Broderick and Brian Kerwin, so don't feel too sorry for him.