I was an idiot in terms of career-building, but I had a great time. 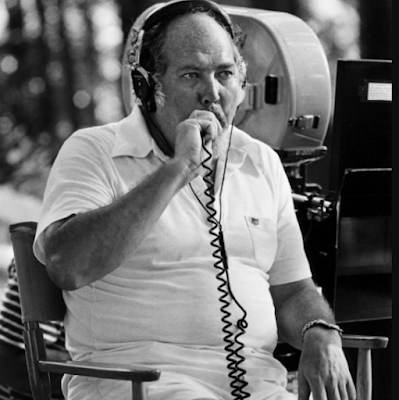 Filmmaker Robert Altman was born on this day in 1925. He died in 2006, but not before first receiving an Honorary Oscar for lifetime achievement. Lily Tomlin and Meryl Streep offer a rather lengthy introduction (which I'll explain in a bit), and then the great director himself:

Robert Altman's revelation that he once had a heart transplant took just about anyone who recognized the name Robert Altman completely by surprise. Finding out you need a heart transplant, preparing beforehand for a heart transplant, recuperating from a heart transplant--doesn't all that take a while? No one could remember Altman being absent for any length of time. Now, he was a movie director and not a movie star, and so unlike the latter, Altman wasn't followed around by paparazzi the moment he walked off his property. Yet neither was he totally ignored by the portion of the media that covers the entertainment industry. For one thing he was a very prolific director, averaging a film a year since 1968. Some years there were two films. And there were projects for television (in the 1950s and '60s he been a prolific TV director) such as a new version of The Caine Mutiny Court-Martial (with Brad Davis in the Humphrey Bogart role) and his election year collaboration with Doonesbury cartoonist Garry Trudeau, Tanner 88, starring a favorite actor of his, Michael Murphy. Altman also had an air of motion picture historicity about him, ever since his 1970 landmark film MASH introduced, or at least emphasized as no film had before, a whole grab bag of cinematic tricks that made the "New Hollywood" landmark of a few years earlier, The Graduate, look like The Great Train Robbery. By the 1990s, moviegoers had moved on to other things, and the box office misses exceeded the box office hits. Yet no matter how commercially (though not necessarily artistically) irrelevant he became, there always was enough of a buzz about a new Robert Altman film to guarantee him a fresh round of interviews with the leading entertainment journalists. So how in the world could a heart transplant be so overlooked? 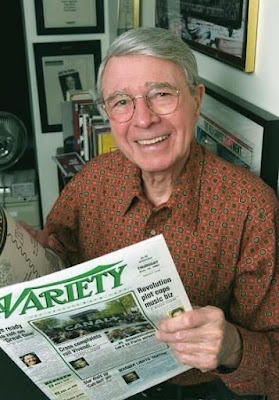 Turns out one prominent entertainment journalist WAS paying attention. On December 3, 1995, Army Archerd in his long-running Variety column reported “Good wishes are out to director Robert Altman who underwent heart transplant surgery Sunday. Altman had known the surgery was necessary since last March, friends say.” Altman's wife Kathryn promptly got in touch with USA Today, and that venerable newsmagazine a few days later supposedly set the record straight: “If you heard Robert Altman had a heart transplant, we happily report it’s untrue. He has heart problems, he’s fine. He’ll be fishing next week.” We now know that Mrs. Altman was less than honest with the venerable newsmagazine, as she admitted later on, "We denied it like hell." Why? According to Altman himself "There was such a stigma associated with a heart transplant at that time" He was afraid no one would ever let him direct another film, thinking he might drop dead on the set. Well, it's understandable. Who among us hasn't fudged the truth on a job application or résumé? There's still the question of the prolific filmmaker's busy schedule. I looked up Altman's filmography, and there is in fact quite a gap between Prêt-à-Porter, which came out in December of 1994, and Kansas City, which was released in August of 1996. Had Altman been a movie star such a long absence from the public eye wouldn't have gone unnoticed, but he was a movie director, so it did. Altman lived another 11 years after his transplant, about four years short of average. However, it was not heart disease but another insidious malady that felled him: leukemia. 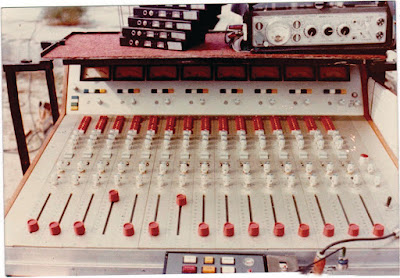 We now move from the heart to another internal organ, the larynx, informally referred to as the voice box. If you're not familiar with Robert Altman's work, you may have been puzzled by Lily Tomlin's and Meryl Streep's introduction. Why were they stepping on each other's sentences? Was there static on the teleprompter? Lily and Meryl were in fact trying to evoke one of the defining features of an Altman film: overlapping dialogue. Now, Altman didn't come up with the idea. Howard Hawks used it in His Girl Friday (1940), and Orson Welles (along with every other cinematic trick) in Citizen Kane (1941). Altman, working thirty years after Hawks and Welles, had a technological advantage they lacked: multitrack recording, basically wiring each actor with a mike, taping each actor's dialogue with separate tape recorders, and later playing it all back in a sound studio, turning up the volume on the bit of dialogue most meaningful to the film. At least, I think that's how he did it. After all, I'm not a sound engineer (comment section mainstay Shady Seaweed worked in television--maybe he can elaborate.) However it was done, Altman's reasons for doing so differed from Hawks and Welles, who simply wanted to cram as much exposition as they could in a scene. Exposition never concerned Altman much. It's impossible in practice but were a 30-something Ernest Hemingway to write a one-page synopsis of MASH or McCabe & Mrs. Miller or Nashville or A Wedding and turn it in to a community college teaching assistant for grading, he would get an F for having too many meandering sentences and not coming to the point. Even if some of his movies like The Long Goodbye, The Player, or Gosford Park had something resembling a plot, it was not narrative that Altman was after but a more immersive experience for the viewer. And a voyeuristic one as well. Not in the sense of looking through a peephole, but the voyeurism that we can't but participate in when we're amongst a crowd of people, and overhear little snatches of conversation, even inconsequential snatches of conversation that would otherwise bore us if we were being addressed to directly, but paradoxically intrigue us when absorbed secondhand. However, if you just as soon be by yourself and don't want anyone else around you, avoid this potentially absorbing collection of Robert Altman's signature conversation set pieces: 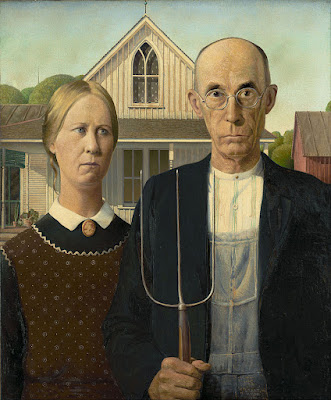 I had to go to France to appreciate Iowa.

--Grant Wood, on his famous 1930 painting American Gothic, so-called because the window on the top floor of the farmhouse is in the Gothic style, much like you would see on a medieval cathedral in Europe. 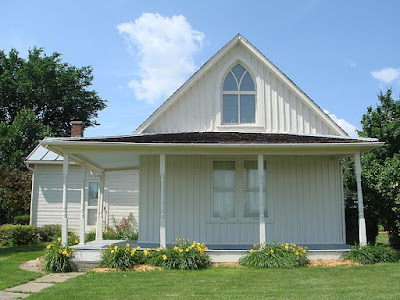 The actual house, in Eldon, Iowa. Built in 1881-82, the top floor window is thought to have been purchased through a mail order catalog. 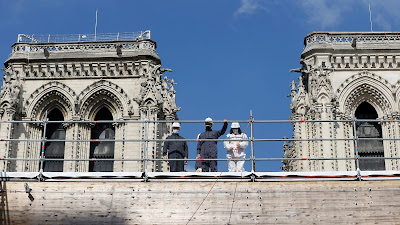 By way of comparison, the pointy arch-shaped windows of a medieval cathedral in Europe, one that very nearly burned to the ground a few years back. 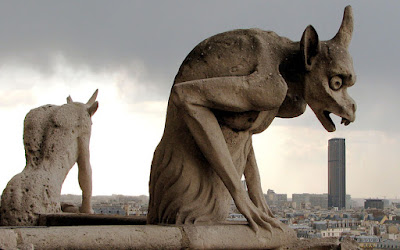 These guys never made it to that Iowa farmhouse. 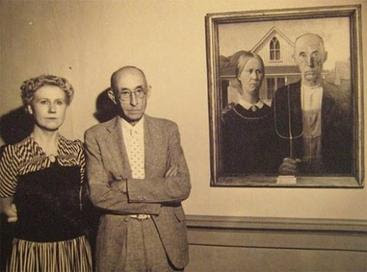 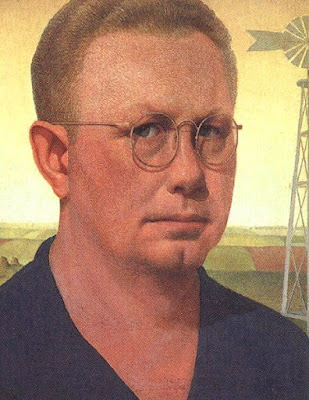 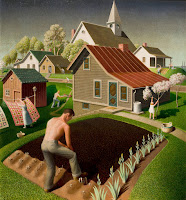 The artist himself in a 1932 self-portrait, a strapping Midwestern farm boy made good. Too strapping for some. A colleague named Lester Longman at The University of Iowa's School of Art tried to get Wood fired as a teacher, publicly citing the limitations of an artistic movement known as Regionalism, of which American Gothic was a prime example. Yawn. However, the complaints were much less esoteric behind closed doors. Longman complained to university officials about Wood's "personal persuasions", and that he had a "strange relationship" with a man helping him write his autobiography. It didn't help matters any that some of the rural workingmen in Wood's paintings occasionally felt the need to take off their shirts as they toiled under the hot sun. Remember, this was around 80 years ago, and a least a quarter of a century before Stonewall. What for some of us today is another welcome addition to the growing LGBTQ roster of historical figures, and what for the art historian adds another layer of meaning to Wood's work, would have been career-damning at the time, with a possible additional visit to a jail cell or mental ward. Fortunately for the artist, nothing was ever proven, and Wood kept his job. He died of pancreatic cancer in 1942, one day short of his 51st birthday.

As for the supposed artistic limitations of the Regionalist Movement (which also counted Thomas Hart Benton as a member), the main complaint seems to be that it romanticized rubes, celebrated unsophistication, and in its pursuit of the parochial, ignored the richness of the wider world. But perhaps Grant Wood, an American expatriate in Europe throughout much of the 1920s, appreciated how that wider world could make its way to some Iowan rube's house via a mail order catalog. Multiculturalism on the prairie.

Besides, there are some sophisticates who DO seek out the simplicities of rural living: 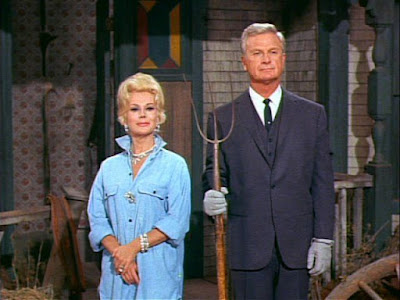 Nice homage, but what about the windows? 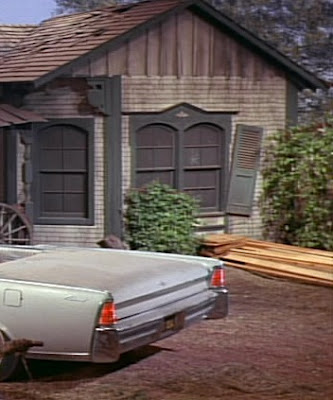 Arched, but not nearly pointy enough to be Hooterville Gothic, I'm afraid.

The Best of Times 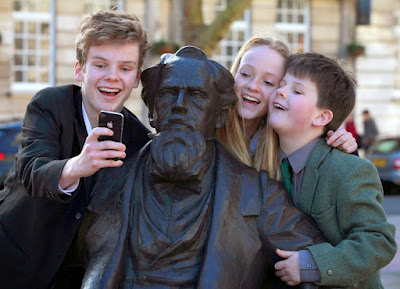 By 2014, all of Charles Dickens' works had entered the public domain, but the lack of royalties didn't stop three of the late novelist's great-great-great grandchildren--Tom, Lydia, and Oliver--from getting a selfie taken with a then-newly unveiled statue in Portsmouth, England, the city of his birth. If talent runs in the family, these kids should have great expectations all their own.