A town crier outside St. Mary's Hospital announces the birth of a baby boy to William and Kate Whateverthehelltheirlastnameis.

Look at his face, will ya? Jeez, you'd think he just had his umbilical cord cut.

‎When we are young we generally estimate an opinion by the size of the person that holds it, but later we find that is an uncertain rule, for we realize that there are times when a hornet's opinion disturbs us more than an emperor's. 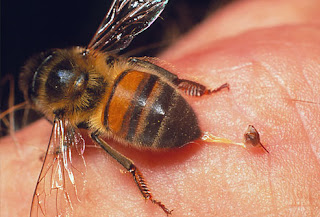 Vital Viewing (Is There a Dentist in the House Edition) 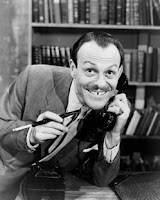 British comic actor Terry-Thomas was born on this day in 1911, making him 102 were he still alive. He's not, and is considerably younger than that in the following clips:

Here Thomas (or should I say -Thomas?) tries to fence some diamonds in this scene from That Touch of Mink (1960):


Those of you who recognize the zither might have expected Orson Welles and Joseph Cotten. Sorry, different movie.

Terry-Thomas and Milton Berle debate the merits of their respective homelands in this somewhat dated scene from It's a Mad, Mad, Mad, Mad World (1963):

A stand-up routine from The Judy Garland Show. The "recent events in London" line is a reference to the Profumo Affair, a UK sex-and-politics scandal very much in the news at the time:


Love how quickly he makes light of his poor attempt at an Irish accent. Not sure if any Portuguese will agree with me.

Finally, a bit of horror (and kinkiness.) The Abominable Dr Phibes (1971) with Vincent Price and the sexy Virginia North:


Not the discharge he was hoping for.

20 years ago,  Scott McCloud wrote a very influential book called Understanding Comics: The Invisible Art, a treatise on what's variably been called sequential storytelling, graphic narrative, pictorial exposition, panel composition, non-animated cartoons, and the funny papers. That right there takes a lot of understanding. McCloud does a pretty good job explaining if not that than everything else having to do with comics, and not in prose but rather through sequential pictures and (mercifully, no one's come up with a technical-sounding synonym for this yet) word balloons.  Basically, it's a book in the form of a comic. But not a comic book, as we understand the term. Comic books aren't books at all, but really skinny graphic magazines, usually sold on different racks than thicker graphic magazines like Mad or (assuming it still exists) Cracked. On the other hand,  McCloud's book is just that, a book, with a hard cover. Unless you have the paperback edition, in which case it has a soft cover, though one still much harder than anything from DC, Marvel, or Archie that you'll see on a comic book rack. Back when there were book stores, Understanding Comics could usually be found in the graphic novels section. Except it's not a novel. 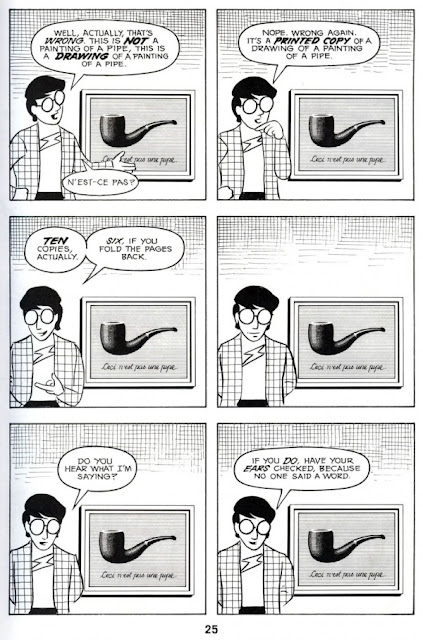 Ha! The joke's on McCloud. Since you're now reading all this on a computer, it's actually a digital copy of a printed copy of a drawing of a painting of a pipe. As such, you can't fold it!
Unless you're computer is attached to a copier.
Posted by Kirk at 1:27 PM No comments: