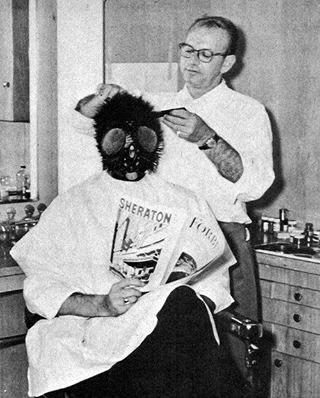 Yes, the above picture is that of a fly reading what appears to be Forbes while being groomed by a middle-aged man in glasses. Look carefully, or even haphazardly, and you'll see what appears to be a human hand holding up the back of the magazine, which has an ad for what I'm guessing is the Sheraton hotel chain. So it's not really a fly at all, but an actual human, an actor by the name of David Hedison. In the 1958 film The Fly, Hedison played a scientist named Andre Delambre who invents a machine that can transfer matter across space, sort of like the transporter on Star Trek, though it would be another eight years before that show's debut. Unlike Captain Kirk, Dr. Delambre doesn't want to beam himself from the Starship Enterprise to a planet down below. He's perfectly content, and reasonably believes it would be a big enough scientific achievement, to go from one side of his basement to the other. Unfortunately, when he steps into the chamber, he doesn't notice the housefly inside. The machine switches on, atoms scramble, and man and fly end up with each other's head and arm/leg. On the plus side, they do make it to the other side of the basement.
Here's another picture: 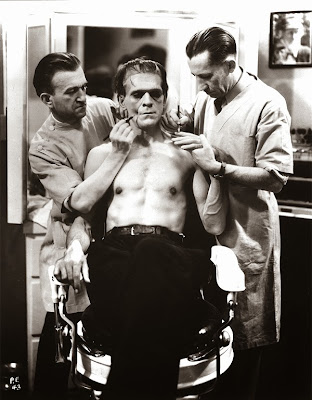 The bare-chested flat-headed fellow in the middle is actor Boris Karloff. Obviously, he was never in the running to play Tarzan. No, he portrayed the title character in the 1931 film Frankenstein. Wait, that's not right. An actor by the name of Colin Clive played that particular role. The confusion is understandable. Even Universal Pictures sometimes got it wrong, such as when they came out with Abbott and Costello Meets Frankenstein in 1948. Bud and Lou met no such person. They did meet, or at least ran in the opposite direction of, a monster played by Glenn Strange. But Karloff portrayed that monster first, and best. In the 1931 film, Clive/Frankenstein is intent on creating life in the laboratory, as if the planet wasn't overpopulated enough all ready. Maybe the idea was to help childless couples.  Anyway, the result is Karloff. As you can see, he has a face only a mad scientist could love. 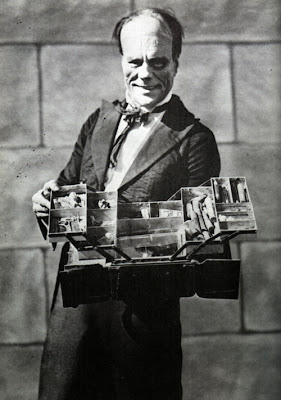 No, this fellow's not the Batman villain Two-Face. It's actor Lon Chaney, who played the title character in the 1925 film Phantom of the Opera. What exactly is a phantom doing at the opera, you may ask? Turns out he's a frustrated producer. When his favorite actress doesn't get the lead, he goes into a snit and drops a chandelier on the audience. I do hope the survivors got their tickets refunded. 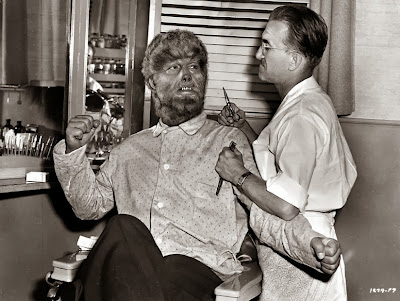 The fellow getting groomed this time is the Phantom's son, Lon Chaney Jr. He actually came into the world as Creighton Chaney, but changed his first name once he realised identification with his father could get him acting jobs. One of those jobs was the title character in 1941's The Wolf Man. He starts out the film as a very human Larry Talbot, and turns into a monster only after being bitten by a wolf. He should be grateful he didn't get rabies. 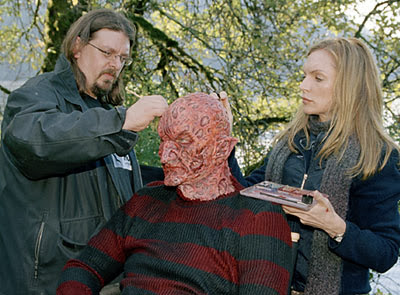 If you're not quite sure whom that gruesome fellow in middle is, first imagine him wearing a fedora. You can't see his hands, but if you could you would, or should, see switchblades in lieu of fingers. Yep, it's none other than Freddy Kreuger, aka actor Robert Englund, of The Nightmare on Elm Street movies. In the first film of this long-running series, Freddy terrorizes teenagers in their dreams until he finally kills them, and they wake up dead. Or rather they don't wake up. He does this seven times from 1984 to 2003. Why? Originally to seek revenge. He was burned to death by a bunch of vigilante suburbanites, and now he's going after their kids. Why was he burned alive? He murdered a bunch of kids. And why did he do that? As Peter Boyle told another serial killer in an episode of The X-Files, because he's a homicidal maniac. So basically Freddy goes from being a homicidal maniac in life to a vengeful homicidal maniac in death. As the series progresses, he puts revenge behind him and goes back to being a homicidal maniac without any personal bias attached. He eventually goes after the real-life actors who played the characters in the first movie, but only kills the fictional people they encounter, proving that, in this series at least, being make-believe can be hazardous to your health. Finally, he has a turf war with Jason Voorhees, of Friday the 13th fame. I, for one, don't blame Jason for moving to the suburbs. There's a lot more kids there to kill then you're gonna find at some abandoned summer camp.
What the above pictures all have in common is that none of them are from the actual movies I describe. Rather, they're behind-the-scenes photos of the actors in the process of being turned into hideous beings so they can appear in those movies. None of these thespians were hideous in real life. Mostly, they were average-looking, except Hedison, who had screen idol looks (though the Voyage to the Bottom of the Sea co-star had to contend with a much smaller screen as time went on.)
The man responsible for Karloff's and Chaney Jr's hideousness was long-time Universal make up department head Jack Pierce. That's him to the left of Karloff in the Frankenstein photo (sorry, don't know who the other fellow is) and he's holding up the scissors in the Wolf Man picture (when I see that I'm reminded of the Bill Cosby routine about a werewolf getting a haircut "Just a little off the knee.") Ben Nye is the guy hiding all human traces of David Hedison, except the one hand. Nye later founded his own make up line. David B. Miller did Englund's makeup in the first Nightmare, but that's Bill Terezakis and an assistant applying the scars for a later film.  As for Lon Chaney Sr, he did his own transformations, and is proudly displaying his makeup case in that photo.
Suppose you saw one of those monsters in real life? What would you do? Run? I wouldn't blame you, but how far would you run until it occurred to you that maybe that really wasn't a monster you saw? After all, everytime you see a film where the monster's a  monster solely through the art of make up, it's evidence that someone who's NOT a monster can LOOK like a monster. Thus, once you're safely in your house, your basement, with the doors to both locked and bolted, and you're hidden under the pool table, then would probably be a good time to say to yourself, "Hey, I bet that was an actor. I should have got his autograph!"

Of course, all actors dressed up like monsters aren't necessary worthy of an autograph. Halloween's almost upon us, and all those "haunted houses" run by the Jaycees and whoever are open for the season. We don't think of the people who work in such places--often high school or college kids--as being actors, but that's what they are, even if they don't belong to Equity. Just like Karloff and Englund, they, too, have transformed themselves into creatures of the night via make up. Or rubber masks if they're lazy. I try not to judge. It can't be easy squeezing horror in between homework. 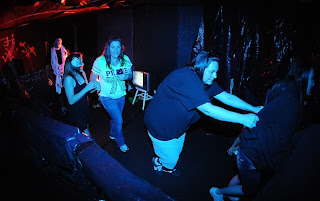 Certainly people do get scared when they go to those places. But I wonder, are the scariest haunted houses the ones where actors have the most convincing makeup, or masks? I once went to one where someone dressed like a--well, I'm not sure what exactly, but it was scary enough. Except I knew it wasn't real. I was in one end of the room, and the goblin or ghoul or whatever was in the other. He (or she; couldn't tell) came up to me and went AAARRRRGGGHHH!!!! and then followed me out of the room, down a hallway, and right out of the haunted house, AAARRRRGGGHHHING all the way! I'm like, dude, I get your point already. But the make up was convincing. 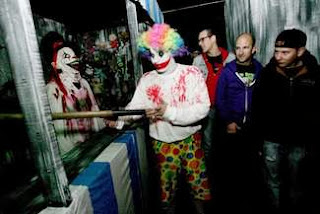 Unlike real haunted houses, assuming there are such things, fake haunted houses operate under a tremendous disadvantage. People who willingly go to one know, as I did, that it's fake. If they didn't, they probably wouldn't go. I mean, if it's a real haunted house, the monster kills you, right? What's the fun in that? Yet the paying customers do want to be scared, but just safe and secure in the knowledge that no physical harm will befall them. Frankly, it's a rather contradictory thing to want, but I suppose some psychological theory about getting your catharsis off can explain it. Except make up (or a mask) no matter how good, isn't going to do the trick by itself. Instead of fear, it may just inspire a certain admiration for a job well done. 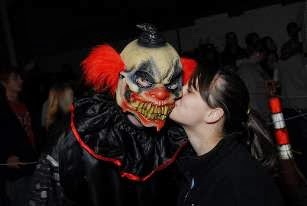 The key, I think, is the element of surprise. Not that surprise is all that easy is a situation where people are walking around snapping there fingers going, "C'mon, c'mon, it's a haunted house, I want to be surprised. Coulda gone and seen Fast and Furious 17, instead I came here." But it can be done. Just make sure their mind is somewhere else. Ever do that? I don't even mean on purpose. I mean, you know, someone's wrapped up in their own thoughts, you innocuously say "hi" or whatever, and they jump back and scream, "Oh! You frightened me!" At which point, you rush to the bathroom and check your face for acne. Fright begets fright.

If I had a haunted house, here's what I would do. I'd give everybody who walked in a Rubik's cube. Let them walk through the place trying to figure out how to solve it. When they're deep into it, then you scare them. The house wouldn't even have to look haunted. It could be brightly lit, with pictures of baby chicks on the wall. My actors would look equally unsuspecting. Instead of monsters, they'd be dressed like Jehovah Witnesses. I envision them sneaking up on unsuspecting Rubik's holders and saying things like "Have you read the latest issue of The Watchtower?" Trust me, people would jump right out of their flip-flops. And the cubes would remain unsolved.

Getting back to movie monsters, there is an exception to the anything-scary-in-a-movie-could-be-fake-in-real-life rule. Stop-motion or digital animation creatures. That can only be faked on the screen. So, if you happen to see a fifty-foot ape in a real-world setting, you have my permission to wet your undies. 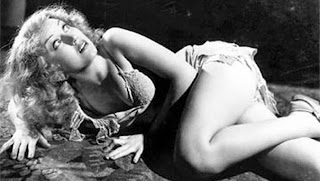 All this talk about stop-motion or computer animation makes me wonder. Suppose you saw a run-of-the-mill animated figure in real life. I don't mean someone dressed up as a cartoon character, like you see at Disneyland. I mean, a hand drawn cartoon. Wouldn't have to be a monster. Could be the most benign, friendliest cartoon character in the world, yet if you saw it walking right up to you on the street,  I bet you'd be scared. I bet you'd run. Or, if you were cornered, I bet you'd reach for your crucifix.

Or your Scooby snacks.

There's one last picture I want to show you: 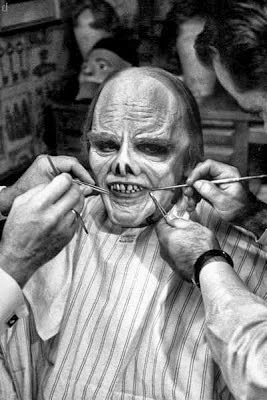 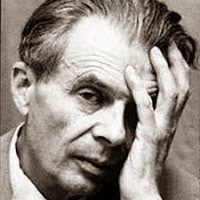 It is a bit embarrassing to have been concerned with the human problem all one's life and find at the end that one has no more to offer by the way of advice than "Try to be a little kinder."