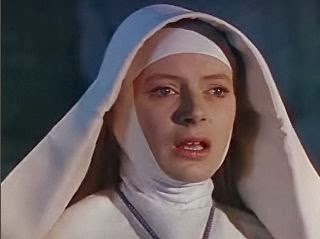 By some odd stroke of fate, British actress (and later Hollywood star) Deborah Kerr and British film director (who never made it to Hollywood but should have) Michael Powell both share a birthday. She was born on this day in 1921, and he a bit earlier in 1905. They made several movies together, the most famous of which is Black Narcissus, (co-directed--as was often the case--by Emeric Pressburger), all about a convent high in the Himalayan hills where a group of repressed nuns wage a mighty struggle with their own pent-up desires. And what is it exactly that the pent-up sisters desire?

You have to understand, this was shot in 1947. The British censors back then were just as efficient at pent-upping the desires of filmmakers as their American counterparts. Besides, ever see a nun put on lipstick? She might as well be doing a striptease. 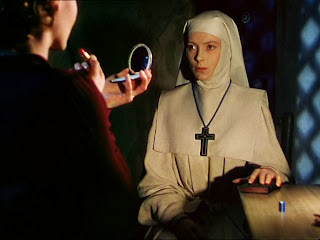 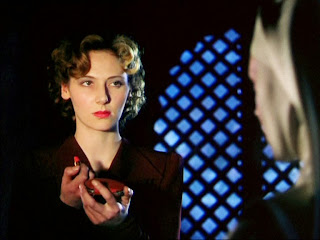 OK, she was actually resigning from the nunhood, but Sister Kerr is nevertheless appalled.


If you didn't have the seven minutes to spare, what the professor or whoever was talking basically said was that back when this film was made, the West viewed the East as a land of sinful sensuality. How times change. Nowadays, the East views the West that way!

SPOILER ALERT: The final clip I want to show you is the film's climax. If you really want to see this movie sometimes, and I obviously recommend that you do or else I'd be wasting my time on something else, I suggest you skip this and go see if it's available on Netflix, which I'm sure it is.

That said, here's the aforementioned Deborah Kerr (the one in the habit) and British actress (and never quite a Hollywood star, but, Jesus Christ, she should have been) Kathleen Byron in a scene that's a literal cliffhanger:

Animator Chuck Jones was born on this day in 1912. He's best known for the thirty-some years he spent at Warner Brothers, where he brought to life such characters as Bugs Bunny, Daffy Duck (my favorite WB cartoon character, incidentally), Porky Pig, Elmer Fudd, Pepé Le Pew, Marvin the Martian, Wile E. Coyote, and the Road Runner.

The characters Jones didn't bring to life include Yosemite Sam, Foghorn Leghorn, Tweety Bird, Speedy Gonzales, the Tasmanian Devil,  and, for those of you with long memories, Bosko. Also, his Bugs, Daffy, Porky, and Elmer look and act a little different than they do in shorts directed by Tex Avery, Frank Tashlin, Bob Clampett, Friz Freleng, or Robert McKimson. I bring this up to remind you that the animation studio founded by businessman Leon Schlesinger (whom Jones, Avery, Tashlin, Clampett, Freleng, and McKimson reportedly disliked) was no assembly line operation but a progressive arrangement that encouraged artistic freedom, innovation, and individuality. As long as the cartoon took no more than two weeks to make and turned a profit. Hell, I don't know. The system worked somehow. Maybe it was just dumb luck. Variously called Looney Tunes or Merrie Melodies, the cartoons were both commercial and artistic successes (though a whole generation would pass before the latter was acknowledged.)

Chuck Jones is now generally recognized as the most artistic, innovative, and individualistic animator ever to have emerged from the studio. Predictably, this almost got him fired early on.

Jones first cartoons for Schlesinger/Warners were cute Disney-like things, many starring a squeaky, motormouthed mouse named Sniffles, an innocent adrift in a world of antisocial basso profundos. These cartoons were lovely to look at but not all that funny. Jones was told to change his style. He did, and came up with this hilarious short. Except his bosses weren't all that amused.  Done in a kind of too slow-then too fast-then too slow again-then too fast again style, with minimalistic backgrounds and abstractly drawn characters, it was considered downright radical in 1942. Jones himself abandoned the technique for a while, until he took it up again about five years later, most notably with his popular Road Runner cartoons.

So, here, then, is The Dover Boys at Pimento University or The Rivals of Roquefort Hall, a parody of a once-popular, now-obscure series of books for adolescents. I really don't think you have to be familiar with the source material to find any of this funny.

Schlesinger/Warners never did fire Jones. World War II was on, and good cartoon directors were in short supply. So at least something positive came out of that attack on Pearl Harbor.
Posted by Kirk at 1:00 AM 4 comments:

I'm late on this one, folks. My apologies, especially to Miss Harris, if by chance the Internet reaches the hereafter.

Actress. Five-time Tony Awards winner, meaning, if you want to see any of THOSE performances, you kind of had to have been there at the time. Fortunately, she did appear in a few movies as well: The Member of the Wedding. I Am a Camera. East of Eden. Requiem for a Heavyweight. The Haunting. Harper. Reflections in a Golden Eye. You're a Big Boy Now. Gorillas in the Mist.

A lot of things. It's imagination and a good voice...And sometimes it's the people, it's small or large. You know, it's everything. Everything.

--Julie Harris, when asked why she was so damn good at her craft.

Her voice was like rainfall. Her eyes connected directly to and channeling the depths of her powerful and tender heart. Her talent, a gift from God.

--Alec Baldwin (I've read and re-read that quote, and, for some reason, I can't quite imagine it coming out of Baldwin's mouth. Nevertheless, I do echo the sentiment--KJ) 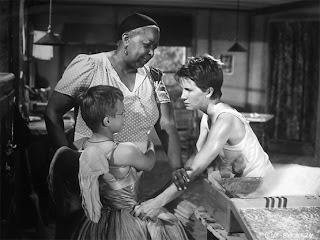 In 1950, 24-year old Harris played a 12-year old tomboy in the Member of the Wedding on Broadway. Two years later, the now 26-year old actress played the same role in the movie version. With Ethel Waters and Brandon deWilde. 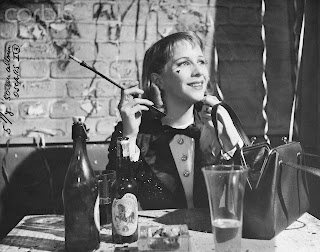 A short time later, Harris played Sally Bowles in I Am a Camera, again both on stage and in the movies. The story later became musicalized as Cabaret. 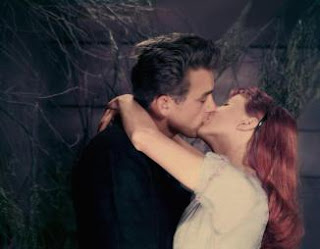 She got over her reluctance later in the movie. Whoosh!

"I doubt that Jimmy would have gotten through East of Eden except for an angel on our set. Her name was Julie Harris, and she was goodness itself with Dean, kind and patient and everlastingly sympathetic. She would adjust her performance to whatever the new kid did. Despite the fact that it had been made clear to me that [studio chief Jack] Warner, when he saw her first wardrobe test, wished I'd taken a "prettier" girl, I thought Julie beautiful: as a performer she found in each moment what was dearest and most moving....She helped Jimmy more than I did with any direction I gave him. 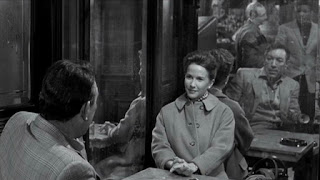 In Requiem for a Heavyweight (1962), Harris played a mousy clerk in a temp agency who becomes absolutely turned-on when an ex-boxer (a puffy-faced, mushmouthed Anthony Quinn) walks into the room.


The Haunting (1964) Ever have one of those nights where you just can't fall asleep? 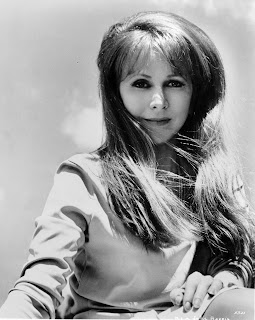