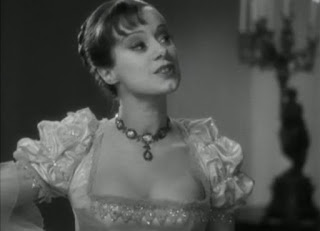 Actress Elsa Lanchester was born on this day in 1902 (she died in 1986.) With her good looks you might assume she played lots of leading ladies roles, or at least was the hero's romantic interest, in many a film. However, she was mostly a character actress throughout her long career, often playing eccentrics, which, while lacking glamour, no doubt kept her steadily employed when those good looks inevitably began to fade.  In twelve of her films made both in England (where she was originally from) and Hollywood, she appeared with husband Charles Laughton, one of the greatest actors of his generation. On her own Elsa had roles in--

You know what? Before I go any further, how about, for anyone who's interested, a lesson on the most efficient way to put on pantyhose? Pay close attention: 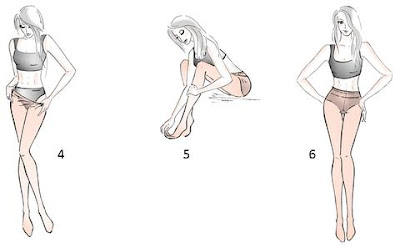 That woman makes it look easy, huh? But remember, she's just a drawing. On actual flesh and bones it may be a bit more difficult, as Elsa explains to Dick Cavett in this 1972 interview:


Now you know why she played eccentrics. As for that poem she mentioned, we'll have to save that for some other day. Halloween is almost upon us, and I have a scary treat for all of you (no, it's not a chocolate-covered eggplant.) I said before Elsa rarely played the romantic interest, but one of the few times she did...


At that point, Mary conjures up a Universal Pictures sequel for Percy Shelley's and Lord Byron's viewing-or-however-they're-taking-in-this-story-in-1818 pleasure. Along the way there's an old blind man in the woods and some little people in jars, both of which I'm going to skip so I can go right to the end. The very end. Like, the words "The End" on the screen end. You know what that means boys and girls, don't you? Something even more frightening than a creature stitched together from dead body parts. I'm talking about the dreaded SPOILER ALERT! So if you haven't seen the movie and want to, you better leave right now.

On second thought, why doncha stick around? Because what I'm about to show you is so giddily gruesome and so gleefully ghastly, with just a touch of piquant poignancy for all you romantic misfits out there who have no problem commiserating with a brokenhearted monster, that you don't really need an explanation as to how all these characters arrived at this particular moment. Just hold on to your pillows and feast your eyes on one of the greatest horror movie finales of all time:

Some people are just not made for each other. 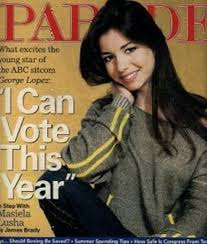 Fifteen years ago actress Masiela Lusha, best known for playing George Lopez's rebellious teenage daughter Carmen on that eponymous sitcom of his, got to vote in her first presidential election, which according to the Parade Sunday supplement, she looked forward to with excitement. I don't blame her. I was excited about voting in my first presidential election--until my candidate lost. It wasn't until my fourth presidential election that I finally picked a winner, so, to all you eighteen-year-olds out there just now getting the right to vote, remember, democracy requires a certain amount of patience. Sometimes a lot of patience. What about Masiela? Did her election year-excitement pay off? And has it continued to pay off in the decade and a half that she's been allowed to vote? I can't tell you. In an effort to pad this blog entry, I did try to find out by googling "Masiela Lusha" and "voting record" and was only 50% successful. I found out everything about Masiela except for her voting record. For instance, even though she played a Hispanic on TV, Masiela is originally from Albania. She lived there until she was about five, when, probably for something having to do with the fall of communism that was going on at the time, she and her family left the country as refugees. Two years later, after stops in Hungary and Austria, they ended up in the United States. In each of these countries, Masiela had to learn a new language, and if you do your math right, you'll find that English is her fourth language, though she speaks it with no trace of an accent (it's good to start young.) She eventually became a U.S. citizen, with all the promise that entails, including Life, Liberty, and a recurring role in the Sharnado movies. OK, a bit of snark slipped in there and I apologize for that. To make up for it I'll point out that, in addition to acting, Masiela has written five books of poetry, two children books, and a novel. In addition, she's been an ambassador for a charity founded by Prince Harry, a spokesperson for Scholastic's Read for Life, a spokesperson for the hunger relief program, Great American Bake Sale, was Ambassador for Youth for the nonprofit Athgo International, and even founded a 501(c)(3) nonprofit of her own, the Children of the World Foundation, all of which looks pretty good on a resume (and further helps when padding a blog entry.) But, getting back to Masiela's right to vote, it still doesn't tell me who she likes among the many presidential candidates running around lately. The election is still a year away, and she may not even know herself at this point, and that's all right. But if I was a refugee from Albania, a refugee from anywhere, even a refugee from some rose-colored spectacled American past, I know who I'd be voting against.

Quips and Quotations (Will It Play in Peoria Edition) 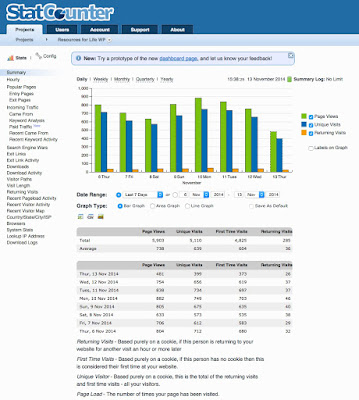 Technology, while adding daily to our physical ease, throws daily another loop of fine wire around our souls. It contributes hugely to our mobility, which we must not confuse with freedom. The extensions of our senses, which we find so fascinating, are not adding to the discrimination of our minds, since we need increasingly to take the reading of a needle on a dial to discover whether we think something is good or bad, or right or wrong.

--Adlai Stevenson
Posted by Kirk at 12:00 AM No comments: 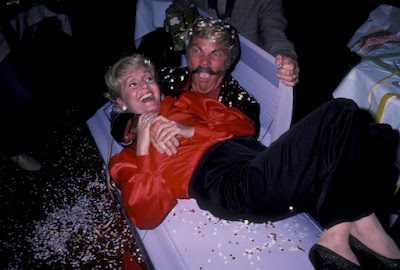 The comedian Rip Taylor died a few days ago at the age of 88, but judging by this 1981 photo, he may have been dead, or rather undead, all along. That's Debbie Reynolds he's got in his clutches. Fortunately for her, this particular vampire is more interested in throwing confetti than biting necks. Not her neck, anyway.
Posted by Kirk at 12:00 AM No comments:

The above Doonesbury strip from May 29, 1973 stirred up a bit of controversy in its day (one of many, many Doonesbury strips to stir up controversy in its day.) Was cartoonist Garry Trudeau assigning guilt to former Attorney-General John Mitchell before he got his day in court? Trudeau said no, that he was merely satirizing the tendency of people like then-campus radical/student deejay Mark Slackmeyer to take premature delight in what was, after all, a failure in the democratic form of government. Eventually, Mitchell did get his day in court and was indeed found guilty, thus rendering the satirical intent of the above strip meaningless. Read today, Mark (and, possibly inadvertently, Trudeau) looks prophetic.

Not that Garry Trudeau was ever a Mitchell, or, more to the point, Nixon supporter. That's President Richard Milhous Nixon, Mitchell's boss, I'm referring to, in case you're somewhat foggy about the politics of nearly a half-century ago and are wondering if any of this has something to do with that one woman who was on Sex in the City. The male Nixon never got his day in court simply because he was pardoned of any potential wrongdoing by succeeding President Gerald Ford one day short of a month after he resigned in disgrace in 1974.

But did he remain in disgrace? Nixon died in 1994, and when he did,  the flags were lowered on all government buildings, public employees were given the day off, the funeral was televised, and viewers at home got to see and hear a twenty-one gun salute while military jets flew overhead. The whole shebang. Nary a word was mentioned about the late President's fall from grace, certainly not by the then President, one Bill Clinton, who chose only to allude to the Watergate scandal that brought the man once referred to as Tricky Dick down by referring to it as "controversial". Just like the Doonesbury strip! Trudeau took note of all the redemption going on by revising his "Guilty, guilty, guilty" panel of 21 years earlier:

Well, that was 24 years ago. There's someone else in the Oval Office these days, and the now white-haired Mark Slackmeyer has to figure out what to make of him. Here's a strip from about two years ago concerning a new presidential scandal that to this day hasn't yet played itself out: 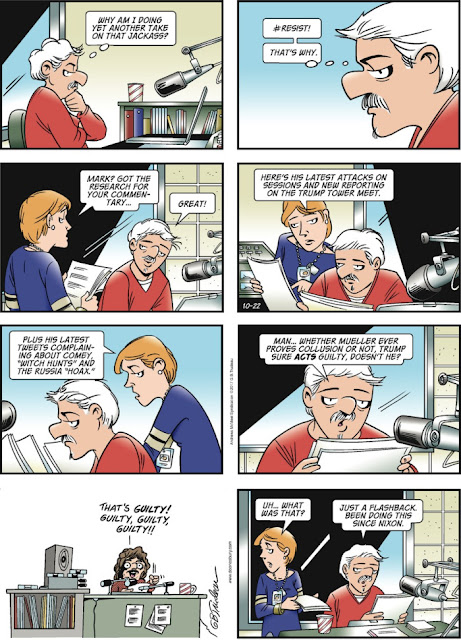 How about that? A topical joke from 1973 yields timeless comedy. Unless you're doing time, in which case you may not find it so funny.
Posted by Kirk at 12:00 AM No comments:


If you're not invited to the party, throw your own. 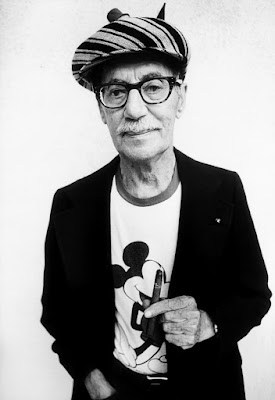 I imagine most of you fashionistas out there--even you fashionistas who were around in the 1970s when the above photo was taken--would advise against wearing a Mickey Mouse T-shirt with what appears to be either a blazer or sports coat and an oversized tam o' shanter cap, but on the 80-something-year-old Groucho Marx, you have to admit, the ensemble works.
Posted by Kirk at 12:00 AM No comments: