They Don't Always Have More Fun

Both my two sisters and my brother had blond hair when they were kids.

My one sister is still blond, but both the other sister and  brother are now brunettes.

I, on the other hand, came out of the womb a brunette, and have remained a brunette for most of my life.

Lately, though, I've found that my hair is getting lighter, the reverse situation of my two sisters and my brother. Ironic, huh?

I think I'll stop by the drugstore and pick up some Grecian Formula.
Posted by Kirk at 5:03 PM 4 comments:

I'm debuting a new, recurring feature, folks. Hope you like it. 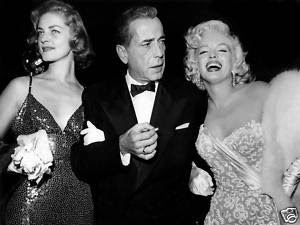 
I was originally going to label this photograph "The Golden Age of Hollywood", but that would have been a bit misleading, for in 1953, that Golden Age was threatened with imminent extinction. Five years earlier, the Supreme Court had ruled the major studios to be in violation of federal antitrust laws, and they were soon forced to sell their theater chains, thus depriving them of a reliable source of income. Trustbusting is usually a good thing, and probably would have been all right in this instance, except that it came at the worst possible time for the studios. The advent of television meant that a moving image was no longer something you had to pay to see in a theater, but one that could now be viewed scot free in the comfort of your own home. People increasingly did, depriving the studios of further income.

Despite all this turmoil, the man in the center of the photo, Humphrey Bogart, was doing all right. Still a major star, he had recently finished work on The Caine Mutiny , where he played the ball-busting, and ball-twiddling, Captain Queeg. His last great iconic performance, he would soon be nominated for an Oscar, though he would lose to the man who, a few years earlier, had lost to him, Marlon Brando. Could Bogart have stayed a major star all the way into the 1960s? We'll never know. See that cigarette in his hand? Kind of fits his tough guy image, huh? In three years he'd be dead of throat cancer.

Let's move on to Bogart's missus, the woman on the left, Lauren Bacall. Now nearing 90, she's often seen as one of the last living links to that Golden Age. After a strong start, however, her movie career basically sputtered. The strong start being the two movies she made with her future husband, To Have or Have Not and The Big Sleep. Though the inexperienced young thespian was more posing than acting in these films (she had started out as a model, after all) the camera nevertheless loved her, and she became a huge star before she really had a chance to hone her craft. A little later she also appeared with Bogie in Key Largo, another big hit. Then the sputtering began. She reportedly began turning down scripts she found of little interest, and the studios then started losing interest in her. Oh, there were a few critically acclaimed films like Young Man With a Horn, and she was on the verge of another big hit, How to Marry a Millionaire, when this photo was taken, at that movie's very premiere, in fact. However, the devil was in the credits. Though she arguably played the main character, she was billed third behind the other two stars, the first billed of whom is to the right of Bogart. Now, none of this is a reflection on Bacall's acting, which greatly improved as her film career declined, and would improve further still when, a few years after her husband's death, she moved back to New York and became a mainstay of the Broadway stage.

Finally, we come to the woman on the right, Marilyn Monroe. Of the three pictured, the 1950s belonged mostly to her. Like Bacall, she had been a model. But whereas Bacall had appeared on the cover of Vogue, Monroe's modeling had been limited to the kinds of pictures you might find posted in an army barracks. Turns out this was just what the movies needed. The studios battled the onslaught of television in many ways--Technicolor, CinemaScope, 3D--before finally settling on sex. True, they couldn't show all that much more than on TV, as the onerous production code was still in effect. Nevertheless, you sure the hell weren't going to see Lucy Ricardo standing over a subway grate while a passing train blows up her skirt. I happen to think Monroe was much more than her considerable sex appeal, but the Hollywood brass didn't necessarily feel that way. Fortunately, she did. Once she was a big enough star, bigger than Bacall had been, she began feeling her oats and started demanding more challenging roles. And got them, for with the rise of the talent agency, the iron-clad studio contract had quickly become a thing of the past.

And so, though this photo at first glance may be evocative of a more romantic, more glamorous era, what you're actually looking at is a Hollywood in transition. Not that transition is unique to Hollywood. Ever since the dawn of the Industrial Age, most places in most times have been in some state of transition or other. Arguably, a lot of great things have come out of that Industrial Age. The electric light. The telephone. The automobile. The personal computer. Near the top of the list I would put the development of photography. It allows us to occasionally take a break from transition and marvel at what has transpired.
Posted by Kirk at 2:43 PM 18 comments:

I was sitting in ninth grade study hall all those years ago, when I eavesdropped on the following conversation:

"It sucked that much, huh?"

"Ha ha, smarty. No, I cried because the girl died at the end."

"The girl didn't really die. The director said 'That's a wrap' or something, the actress jumped out of the hospital bed, got her paycheck, and went home."

"Yeah, but it can happen in real life, too!"

"Then that's when you should cry."