Margaret Thatcher, former Prime Minister of Great Britain, died about two weeks ago. Her politics weren't my politics, nor her country my country, so I just planned on ignoring the whole thing. But then I read something online that referred to her as a "pop culture figure." No, she wasn't! She was a political figure. Just because someone's on TV a lot doesn't qualify them as pop culture. The woman lived at 10 Downing Street, not Graceland!


Still, I wondered, is there some pop culture angle here I'm missing? Meryl Streep played Thatcher a couple of years ago in a movie, but that was long after she left office. How about when she was still serving the British public or whomever? I seemed to remember a Maggie Thatcher imitator popping up on TV and movies in the 1980s. Or it was it imitators, plural?  I did some research and found out it was indeed the same woman, a Scottish actress by the name of Janet Brown. 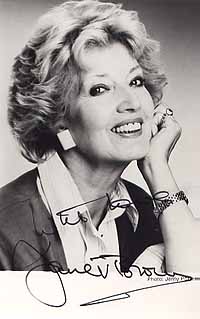 Born in 1923, Janet Brown appeared in many stage, movie and TV productions, without much notice until Margaret Thatcher was elected head of the Conservative Party in 1975. Brown had no political ax to grind; she simply felt Thatcher was now a celebrity (pop culture figure?) and worthy of impersonation. As you can see in the above picture, Brown didn't look much like Thatcher. Of course, when she was actually doing her impersonation, she wore her hair like Maggie's, but this couldn't hide the fact that she was a more attractive and seemingly younger woman (in fact, she was two years older.)  No, the key to Brown's success was not how she looked but sounded. Thatcher had a highly theatrical, low-pitched, pause-filled speaking style (originally piercing and provincial, she had taken voice lessons from none other than Laurence Olivier.) To compare the two, here's the Prime Minister in 1979 on her first day on the job:

All right, now here's Janet Brown from around the same time. I know the various political references will be a bit obscure to most Americans (actually, this was so long ago, they're probably a bit obscure to most Brits under the age of 40), but for my purposes, I'd like you just focus on the mannerisms. Brown has them down...quite pat:

Man, did you see the name of the web site at the end of that clip? Janet Brown may not have had a political ax to grind, but someone else sure did! Remember, folks, there was no Internet in 1979, so that was added on long after. Stiff upper lips notwithstanding, some Brits really know how to hold a grudge (more about that later.)
Janet Brown eventually put out her own comedy album:

In 1981, Brown-as-Thatcher popped up at the end of the James Bond movie For Your Eyes Only. Whoever originally put the following clip on YouTube posted the punchline without the setup. So I'll provide you the setup myself. Bond has successfully wrapped up another assignment, and he and his latest girlfriend have decided to celebrate by going for a swim. However, at the exact moment they take the plunge, Bond's two-way radio wristwatch (Ian Fleming by way of Chester Gould) goes off, with only a pet parrot around to answer it:

Even if you don't feel like watching the video, look closely at the still picture above. See that box of Kellogg's Bran Flakes right behind the phony Thatcher's bouffant? Would it be highly irregular of me to suggest that the film's art director thought the real Maggie might benefit from adding such to her diet?

Janet Brown's Maggie Thatcher finally made her American TV debut in 1983 (the accompanying video says 1985, but various sources I've cross-referenced say otherwise.) The occasion was a prime-time special titled Johnny Carson's Practical Jokes, a forerunner to the popular TV Bloopers and Practical Jokes, which in turn was a forerunner to Punk'd, a show that plays Candid Camera-like stunts (another forerunner--whew!--a lot of forerunning around, huh?) on celebrities, in this instance Joan Rivers, who'd been making fun of the Royal Family. The faux Maggie Thatcher took Rivers to task:

That slap at the end was all staged. Johnny Carson and Joan Rivers remained close friends for another, oh, six, seven, eight months, until she got her own, ultimately ill-fated talk show opposite his.

After Thatcher was ousted as Prime Minister in 1990 (by her fellow Conservatives; they do things differently there), Janet Brown's star generally faded, though she continued to be a working actress well into her 80s. When she died two years ago, it made the BBC evening news:


As I don't live in Britain I can't say for sure, but I suspect, talented as she may have been, Janet Brown will soon fade into obscurity. But what about the person who inspired her act?

Here's a clue. For a couple days last week the song "Ding Dong, the Witch is Dead" sat at number 2 on the British pop charts. Why is something that originally debuted in a 1939 MGM musical suddenly so popular? It's all part of a coordinated effort among left-leaning Brits to infuriate right-leaning Brits on the eve of the Iron Lady's funeral. The infuriation seems to be working. Though no lyrics were changed and it's sung by Judy Garland, who died in 1969 not knowing or caring about Margaret Thatcher, the BBC has refused to play anything more than a seven second snippet of the song until passions cool.

Unlike Janet Brown, Margaret Thatcher won't be forgotten anytime soon. Though her admirers may wish some people would forget about her.
Posted by Kirk at 12:07 PM