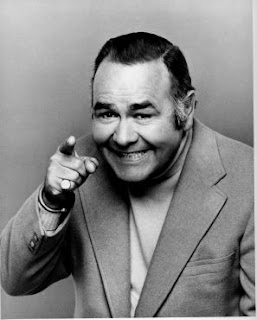 “I don’t do jokes...The characters are my jokes.”
Winters was a master of improvisation.
As a wagon master.

As an airline pilot.
Winters destroys a gas station in It's a Mad, Mad, Mad, Mad World (1963.) Also with Phil Silvers, Arnold Stang, and Marvin Kaplan.
Though he's not in the above scene. Milton Berle was also in It's a Mad...World (don't feel like writing it all out again.) He and Winters share a ride to the movie's premier:
Winter's most famous character was Maude Frickert. Here she is on The Dean Martin Show:
The Rat Pack-like humor in the above clip makes me think this was written by Dean's staff rather than Winters himself. Here's a more improvisational Maude Frickert. Even though Winters is out of costume, I find it much funnier:
Lastly, to bring it all up to date, Winters on Facebook: