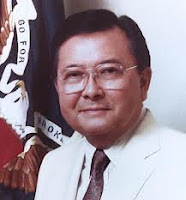 "In 1941, the date December 7th was a day that evoked anger, fierce patriotism and dangerous racism. Soon after that day, I suddenly found myself, pursuant to a decision by the government and along with thousands of Japanese Americans declared 4C, enemy aliens. It was a difficult time. I was 17."

Enemy alien or not, Inouye enlisted in the US Army, and lost part of his right arm during a charge on a machine gun nest in Italy.

“This is my country...Many of us have fought hard for the right to say that. Many are now struggling today from Harlem to Da Nang that they may say this with conviction. This is our country.”

"There exists a shadowy government with its own Air Force,
its own Navy, its own fundraising mechanism, and
the ability to pursue its own ideas of national interest,
free from all checks and balances, and free from the law itself."

In the late 1980s, Inouye chaired a special committee investigating the Iran-Contra scandal.