Serpentine Logic, or Dublin or Nothing 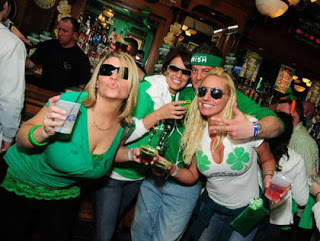 Today millions of Americans will don green clothes (a bit redundant if your a boy scout or forest ranger), drink green beer, and subsequently spew green vomit in celebration.

I hear the holiday's popular in Ireland, too.

The above was a joke, but in many way St Patrick's Day is an American invention. It started in Ireland, of course, but as a religious holiday, something to do with that Patrick fellow being a "saint". It was us Yanks who secularized it, in the best way we know how, by excessive promotion (St. Paddy's Day Sale! 17% OFF Anything in the Store That is Green!), excessive merchandising (St Patrick's Day Pimp Hat for only $8.99!), excessive eating (16" corn beef and cabbage pizza for $13.99 plus tax), as I mentioned earlier, excessive drinking (Irish I were drunk, as one T-shirt puts it) excessive horniness (Get lucky tonight--St Patrick's Day Lingerie and Costumes in stock!), and, finally, excessive law enforcement (Police Ramp Up Alcohol Patrols for St. Patrick's Day.)

Of course, parades are popular on St. Patrick's Day. If you go to one today, you might see something like this: 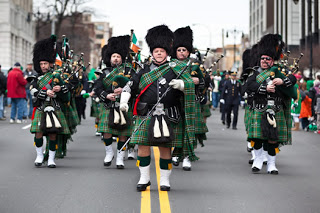 Kilts and bagpipes? That's Scotland, not Ireland! Oh, well, to most American ears the accents sound the same. They might as well dress alike and play the same music.

In case you're wondering who exactly St Patrick was, legend has it he drove all the snakes out of Ireland. 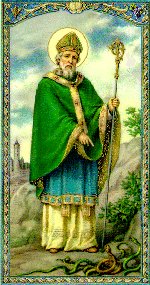 Good reason to celebrate. In Ireland. How about here in the US? What's our snake situation?

According to my research, there's about 130 species of snakes in North America, several of them venomous. We're up to our necks in snakes! Cancel the camping trip! Don't I have enough things to worry about without some long, slimy, creeping, crawling, slithering reptile sneaking into my tent and strangling me in my sleep?

And exactly why do we have all these snakes in the first place, huh? I have my suspicions. When Patrick drove them out of Ireland, they had to go somewhere, right? Thanks to him, we now have 130 invasive species--that's thousands of snakes per species--just biding there time in the weeds waiting to attack. And we're throwing a party celebrating the man responsible for this ecological catastrophe?

All that green beer has dulled our senses. Or maybe just mine. 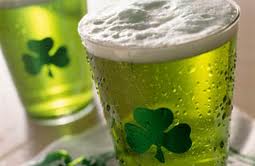