Going for the Old

Every so often, I skim through a page on Wikipedia titled "Deaths in 2012." Two months from now I'll be skimming through "Deaths in 2013." Last year, I was skimming through "Deaths in 2011." You get the idea. I do this to see if anyone obscure but notable has passed on but whose obituary didn't make my daily paper, or if it did I missed it because it was too small, or too far below the fold, or whatever. By "obscure but notable" I mean has-beens or never-weres, folks who are not, or are no longer, famous, but aren't quite unheard of either. That's how I found out about this fellow's passing:

If you're not familiar with Dad's Army, it was a situation comedy popular in Great Britain from the late '60s to the mid- '70s. Taking place during World War II, it concerned a unit of the Home Guard, British volunteers deemed unfit to serve in the regular army, often due to age, and so did their part in this special service as a secondary line of defense in case the Nazis invaded, which, fortunately, they never did. I discovered Dad's Army about 15 years ago on a Youngstown PBS affiliate and found it hilarious. Dunn, though not the star of the show, was memorable as Lance-Corporal Jones, an elderly veteran of previous wars who couldn't stop talking. Here's Dunn in action:

While he was still on Dad's Army, Dunn released a song called "Grandad" that sat on top of the UK singles charts for three weeks in 1971, making him an unlikely pop star:


Some rather nubile granddaughters he's got there, huh?

When I read that Dunn was 92 at the time of his death, I originally thought nothing of it. Dad's Army first aired in 1968, quite a while ago, and Dunn had played an old man on it, so it was only natural that he'd be up there in years.

Then I did the math. As I said earlier, Dunn's character was a veteran who couldn't stop talking. Especially about earlier military engagements. In more than one episode, he mentions the Boer Wars, which were fought at the end of the 19th century. At the very least, Lance-Corporal Jones would have been close to 70 by the time of World War II. If the actor who played him was 70 in 1968, he'd...suddenly, 92 no longer seemed old but unusually young.

I did some research on Clive Dunn. He was actually 48 when he first appeared on Dad's Army. Here's a picture of him around that time, but out of character: 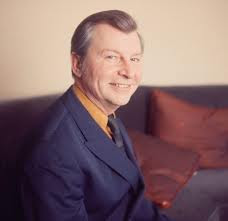 A middle-aged man. A touch of grey, laugh lines, but nothing that cries out "elderly." To play Jones, Dunn must have died his hair white, and further obscured his true age with glasses, but I think it was mostly his skill as an actor that made him such a convincing senior.

And it wasn't his first senior moment, either. In 1960, when he was 40, Dunn played a doddering old man on another British sitcom called Bootie and Snudge. After Dad's Army went off the air in 1977, Dunn played an elderly character yet again in a kids show called, appropriately, Grandad. That lasted until 1984, by which time Dunn was an actual senior citizen.

He then promptly retired.

Over the years, there have been other actors who've risen in their profession. Dunn's fellow Brit Alastair Sim made a career out of playing old men. Americans probably know him best as Ebenezer Scrooge in the '51 film version of A Christmas Carol. Sim himself was 51 at the time. Here in the States, Walter Brennan played elderly roles from the late 1930s, when he was relatively young, all the way to the early 1970s, when he was decidedly old. Redd Foxx was all of 50 when he first portrayed the 65-year old Fred on Sanford and Son. Foxx's childhood friend LaWanda Page played 60-something Aunt Esther on the same show. Estelle Getty was one year younger than Bea Arthur when she played the latter's mother on The Golden Girls.

And so, while the rest of us wash that grey right out of our hair, cover up those liver spots and wrinkles with anti-aging creams, have face-lifts, eye-lifts, neck lifts, and pump our faces up with Botox in a futile effort to hang on to our youth, there are those hardy souls among us darting in the opposite direction.

While they're still able to dart.