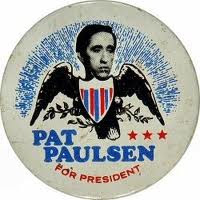 If you look underneath the title, Shadow of a Doubt, on top, you'll see a none-too-brief description of what this blog's all about. Everything, essentially.  But the first three topics are "Social commentary, cultural commentary, political commentary..." When I first started this blog in the spring of '08, though all three were mentioned, it was pretty much political commentary all the time. The reason being, 2008 was an election year, and politics was my muse. The election was always on my mind. I wrote about Hillary. About Obama. About McCain. About Biden and Palin. About the debates. I was vigilant. Whatever hat was thrown in the ring, I'd check for lice. Whatever babies were kissed, I'd check for mono. If any backroom deal was being made, I'd make sure it wasn't from the bottom of the deck. If any mud was slung, I'd make sure it wasn't fertilized--by a bull.

All this was four years ago. Now, it's 2012, another election year, and I'm shocked to find I haven't written about it at all. Why have I been so remiss?

Much of it has to do with time, and the lack thereof. I'm working some unusual hours now, and I'm not at a computer as often. For small things like "Quips and Quotations" or "In Memoriam" it's not really a problem, but the essays that form the heart and soul of this blog (even if nobody reads them) now take much longer, sometimes three whole weeks instead of just one as before. Now, if I'm writing about some old movie or TV show, it doesn't matter. Old is old, and it will still be old after three weeks. But politics, current events, are about the here and now. If I had written about, say, Mitt's dissing of the 47%, it might have not been posted until two weeks after the other 53% percent decided the election. That essay would have been about as relevant as MySpace.

It's not just time, though. Over the past three years, this blog has evolved into an exploration of pop culture, especially past pop culture. That doesn't always rest easily with the politics. If I had all the time in the world to write, I'd probably have three blogs. One devoted to pop culture, one to politics, and the third to personal reminiscences and the like. As it is now, I try to shove all three of those things into Shadow of a Doubt (with a few crumbs tossed every now and then to the otherwise famished Ancient Celluloid.) Now, all three do come from the same brain, same mind, same sensibility. For instance, I saw my recent recent essay on Welcome Back, Kotter as being vaguely left-wing. But I don't expect you to find it left-wing, right-wing, left-leg, or right thigh. Not at the risk of you getting indigestion and then calling the health inspector to check this place out.

OK, in the above paragraph, I just revealed which way I lean politically. Yes, I'm a liberal, progressive, lefty, bleeding heart, pinko (just don't call me a communist; I strongly believe the Five Guys hamburger chain should remain in private hands. I don't want the government messing with those toppings!)

Fear not, conservative readers (I know I have at least one. Maybe I'll hear from that person in the comment section.) I 'm not about to spend the rest of this essay trying to convince you to vote for Obama instead of Mitt. I doubt if you're even persuadable at this point. I just felt I had to get my political ideology out there, or else the rest of this essay would become much too abstract to make sense. It would be like searching for a naked albino in a snowstorm.

I'm also a Democrat. The difference between being a Democrat and a liberal or a progressive or a lefty or a bleeding heart or a pinko is you have to register to be the former. The Democratic Party is supposedly entrusted with representing the liberal point of view in government, and compared to the other side--the Republican Party--they do just that. Except they don't. Not always. Or they do it long after liberals and progressives have moved on to other things. I don't have a problem with that. I understand political realities. What bothers me--and makes it a bummer to write, even think, from the liberal point of view at times--is that the Democratic Party, often for reasons of bald strategy and no other, gets to define liberalism.

I'll give you one example. After 9/11, President Bush's approval rating shot up spy drone high, and he was hailed a great leader for simply being the leader when the whole, sorry thing happened. To counter this, the Dems dreamed up the Department of Homeland Security. When I first heard that a department of that name was being proposed, I thought to myself, isn't it already the Pentagon's job to secure the homeland?  Of course, in spite of all the money thrown at it in the previous 50 years, the Pentagon couldn't even secure itself on 9/11, much less the rest of the homeland. But this new department wasn't going to involve the Pentagon, nor NORAD, nor the CIA, nor the FBI. Instead the idea was to take a bunch of agencies that theretofore has little to do with each other, such as Customs, the Secret Service, the Coast Guard, the INS, FEMA and the Plum Island Animal Disease Center, and put them under one roof. This way, in case of an emergency, instead of federal workers having to take cab rides all over the District of Columbia, they could just stroll down a hallway. Something like that. So, if Democrat = liberal, then I guess the Department of Homeland Security stands as one of liberalism's crowning achievements in this still-new century, for all the good that did waterlogged New Orleanians after Hurricane Katrina. Yes, you could, and should, blame Bush for putting an inexperienced and incompetent political hack in charge of FEMA, but the fact that it was now part of a larger Department of Homeland Security didn't prevent such incompetence from taking place. Really, when the department was being proposed, the Republicans in Congress had every right to attack the Democrats for creating yet another bloated, federal bureaucracy. Instead, for political reasons of their own, they went along with it this time.

Another problem with Democrats = liberal, is that Democrats running for, or already in office, don't like to be, and don't like voters to be, reminded of the "= liberal" part. Both Presidents Clinton and Obama, either themselves or through their spokesmen, have on occasion dissed liberals, some of whom have been rushed to the hospital for emergency tongue surgery after biting down too hard in the name of party loyalty. 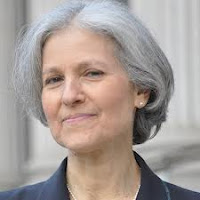 It's enough to make some liberals pine for this Jill Stein chick as a third-party candidate. Actually, everybody of every political persuasion occasionally pines for a third-party candidate, if not necessarily for Ms. Stein. Earlier this year saw the Unity08 movement for disaffected centrists. It fizzled when people saw movement spokesman Sam Waterson talking about it on TV and assumed it was a commercial for TD Ameritrade. Something like it could still pop up in the future. Until ten, maybe 15, years ago, I considered myself a centrist, so I know where those people are coming from. They don't want the boat rocked, as the liberals would do, but also don't want that same boat to turn around and head back, as the conservatives would have it do (in case you're curious, I stopped being a centrist once I realized the boat's compass could be tampered with.) Even some conservatives unhappy that the Republican Party isn't moving fast enough at privatizing turning lanes may want a third party.

But the math is against it. Contrary to popular belief, the American form of democracy isn't based on majority rule. Instead, the candidate who gets the most votes wins.

OK, I can hear you now: "Kirk, what the hell are you talking about? 'Majority' and 'most' means the same thing!" Actually, they only mean the same thing in a two-, not three-, party system. I'll explain. Say there's a table with 20 apples. Tom sits down and takes 8 of these apples. Dick grabs 7, leaving Harry with 5. Who has the most apples? Tom, obviously. But he doesn't have the majority, because Dick's and Harry's combined are more than that. Tom, in fact, has a minority of the apples. He just gets more, that's all.

So, while it's tempting to vote for someone other than the lesser of two evils for a change, with a third party, you may find that the greater of three evils gets in office instead.

Is there anyway this all could  be improved? Well, you could change the law to favor the "majority" over the "most.' Two ways come to mind. You could have a two-part first-choice, second-choice election. If nobody gets a majority, the candidate with the least amount of votes is disqualified. Another election is held, with a nice clear-cut majority/most winner. This way, a liberal could let his hair down and vote for Ralph Nader in the first election, and then more realistically for Al Gore in the second. A conservative could make a principled vote for Pat Buchanan in the first election, and then vote for the more moderate George W. Bush in the second (at least everybody thought he was more moderate in 2000.)  I think we'd have a much clearer understanding of what the electorate really thinks about things. A better compass, so to speak.

Another way, one that I increasingly favor, is to add NONE OF THE ABOVE onto the ballot. Worried about the effect of money on elections? The Koch brothers could go through their entire fortune until they'd have nothing left but a single roll of Angle Soft toilet paper between them, and still couldn't defeat NONE OF THE ABOVE at the polls. Don't like negativity in politics? What kind of smear campaign could you possibly have against NONE OF THE ABOVE? Could you call NONE OF THE ABOVE a communist? If there's anyone who is not now or never been, it's NONE. Accuse NONE OF THE ABOVE of having sex with an underage intern? How would you know if she was on top or bottom?

OK, I can hear you now: "But, Kirk, suppose NONE OF THE ABOVE wins the election? Won't it look rather odd on inauguration day having the presidential limo go down Pennsylvania Avenue with no one in the back seat to wave at the crowds?"

If NONE OF THE ABOVE wins, you would then have a second election, this time without NONE on the ballot. Whoever got the most votes would win that election, but they'd go into office a bit humbled, a bit chastened. There would be no beating on the chest about how they have a mandate, about how the people have spoken.

Well, I suppose he or she could always brag they were second to NONE.