Brought to You By Nabisco 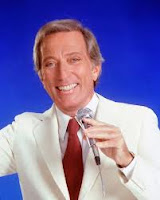 Andy Williams died--lemme check--two days ago. I can't say I paid much attention to him over the  years. I'm in no way prejudiced against his style of singing, which in my youth was referred to a "easy listening." I just have an easier time listening to Frank Sinatra, Bing Crosby, Nat King Cole, or Perry Como than I do Williams. "Moon River" is a great song, but I prefer the way Audrey Hepburn sang it in Breakfast at Tiffany's. And it's nice Williams stood by his ex after she was accused of shooting and killing her ski instructor, but I can no longer remember if she was found guilty or not (well, I am on the Internet, so let me check again...misdemeanor criminal negligence, 30 days in jail plus a small fine.)

Now that I think about it, there was a point in my life when I did pay attention to Williams. I was 8 or 9 and used to watch his variety show on TV. I didn't watch because of him particularly. I just happened to have liked variety shows, of which there were many when I was a kid. Singing, dancing, and comedy skits all under an hour. The format seems just about extinct now. You can still find singing and dancing and comedy skits on TV, but it's all been divvied up. Saturday Night Live gets the skits, American Idol the singing, and Dancing With the Stars, obviously, the dancing. A further example of the fragmentation of the media.

William's show had this recurring skit that I eagerly looked forward to each week. A talking bear would try to finagle some cookies out of Williams, but to no avail. I found this hilarious when I was 8 or 9. Now I just find it a bit strange. Of course, that may even be a better reason to look forward to it each week. Here's a clip of one such skit, in which the bear enlists the aid of a svelte Kate Smith (don't ask me to explain that countdown in the middle of the screen; best I can figure is that whoever originally put this on YouTube taped it on a 40-year old VCR):


A word about Kate Smith, a popular radio performer of the 1940s. If you're not familiar with her, you may be puzzled, after watching that clip, as to why I referred to her as "svelte".  Well, here's what she looked like in her prime: 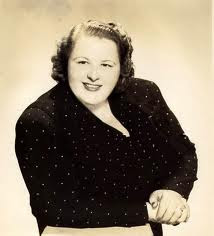 That's in the 1940s. As you can see, she had slimmed down considerably by the time she appeared on Andy William's show in 1970. She was relatively, comparatively, svelte.
As for that talking bear, did you see how he fell backwards at the end of that skit? Obviously, the poor creature collapsed from hunger. And what did Kate Smith do? Just stand there and laugh. How cold. How callous. I hope those cookies made her fat all over again. It would be her just desserts!
Posted by Kirk at 8:10 AM