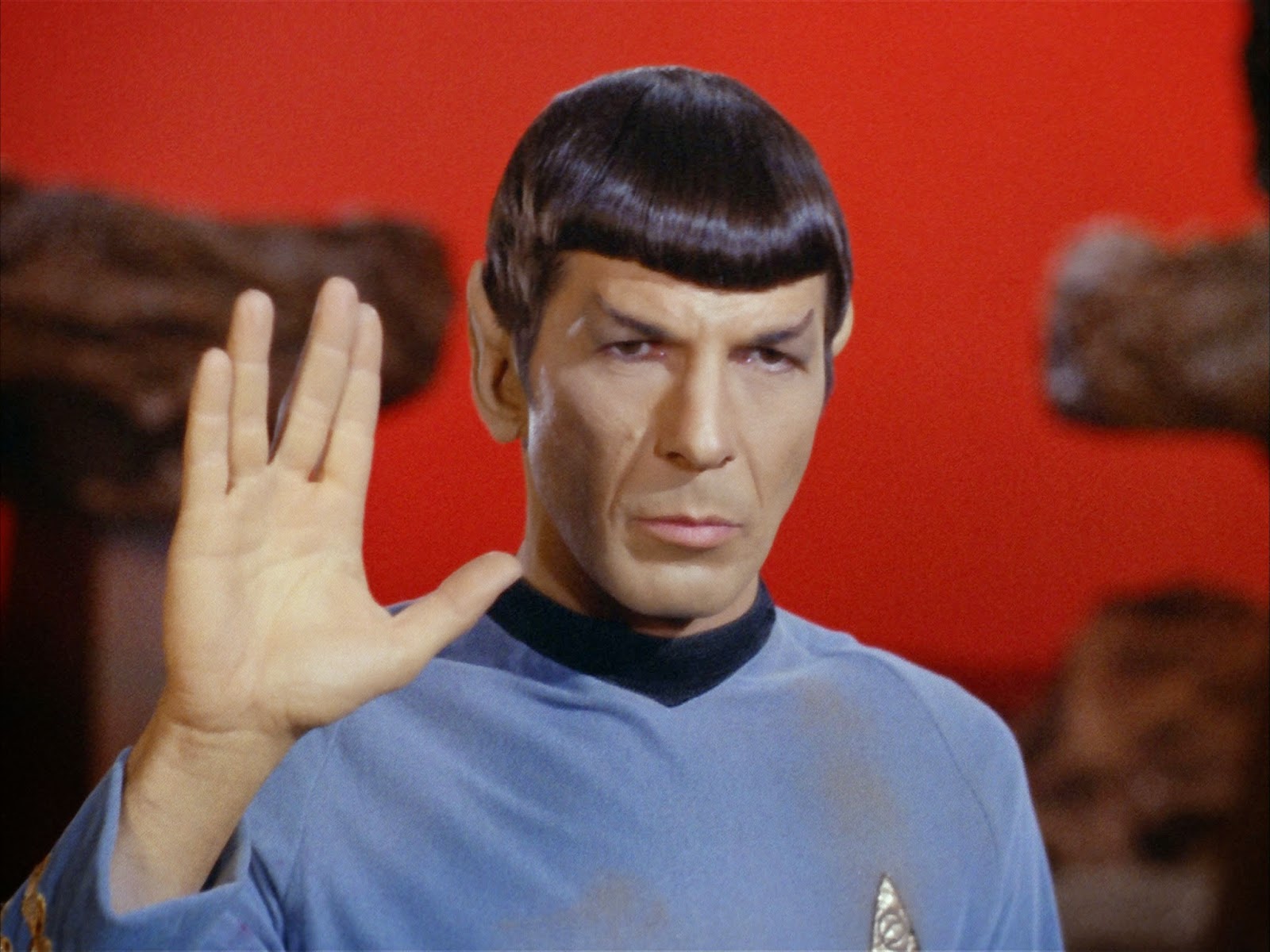 Yeah, I know he left us, but there's a lot I want to say about this man and the memorable character he created, and I don't have all the time in the world--or Vulcan, for that matter--to say it in, so please be patient.


In the meantime, live long and prosper.
Posted by Kirk at 2:21 PM 6 comments: 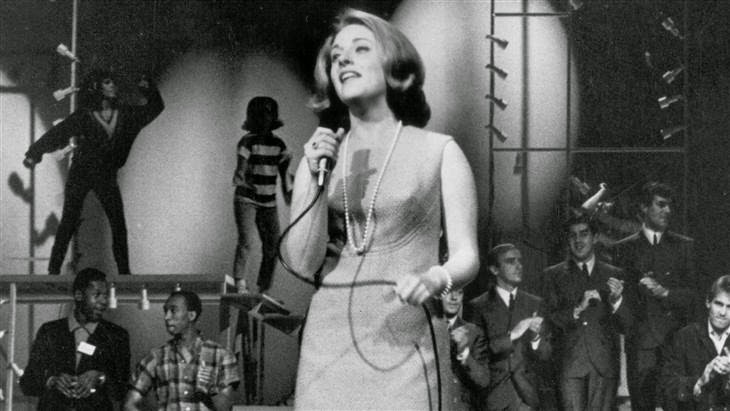 When Lois Sasson confirmed on February 16 that her longtime partner, Lesley Gore, a non-smoker, had died of lung cancer at the untimely age of 68, feminists, freedom fighters, humanitarians and Catwoman lovers of all stripes mourned the passing of an iconic ally and inspiration.

"It's My Party" remains one of the most vivid evocations of adolescent heartbreak ever waxed--Quincy Jones produced the record, although you'd swear it was [Melrose Place producer] Aaron Spelling instead."

If you don't mind hearing it twice, here's a video Gore made of the song some 25 years later:

That looked like Mike Myers' Dr. Evil at the end, didn't it? I've checked and re-checked. The video is from 1989 (as if you couldn't tell that already from the clothes and the hair) and Evil didn't make his debut until 1997.

Now, I, or at least Peter Rothberg, promised you a freedom fighter:

Not exactly Che Guevara, but in that time and place...

You could savor every bitchy second of Lesley's triumph with her sequel "Judy's Turn to Cry".

My take on the song was: I'm 17, what a wonderful thing, to stand up on a stage and shake your finger at people and sing you don't own me.

Left unsaid is whether that was her middle finger that's she shaking (after all,the video was shot from the neck up.)

Now, for Catwoman lovers of all stripes:

The iconic alley and inspiration:

Afraid to go on American Idol? Hell, they've played her songs on that show!

Hey, she made people happy. What's more humanitarian than that? 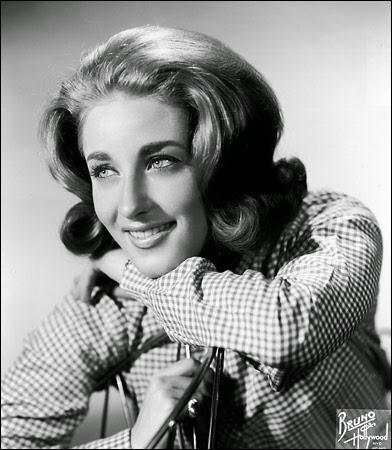 
Gary Owens died a few days ago of complications from diabetes, a disease that had plagued him since childhood. In fact, he once overheard a doctor tell his parents that he probably wouldn't make it out of his teens! He did anyway, as an adult becoming a very popular afternoon disc jockey in Los Angeles. Actually, a suburb of Los Angeles: "beautiful downtown Burbank" a phrase first heard on his radio show. As I grew up in neither Los Angeles nor Burbank in the 1960s, I can't vouch for you just how funny or entertaining he may have been as a deejay, only that there's been many tributes on-line from Angelenos who laughed their asses off at his radio antics, which included asking the audience to "send in for yours", only to receive a postcard with nothing but the word "yours" on it.

What I can vouch for is a TV show I saw first as a kid and then decades later when it popped up on Nick at Nite. Before I tell you what it was, let me tell you how Owens came to be on it. He walked into the men's room at a popular LA restaurant and saw an acquaintance of his, a TV producer by the name of George Schlatter. As a joke, Owens shouted "George! The acoustics are great in here!", his rich baritone bouncing off the tiled walls. Now it just so happens Schlatter had a show in development, one composed almost entirely of blackout gags, i.e. short skits lasting less than five minutes, sometimes less than a single minute. Owens comic announcing would be the perfect linking devices for those gags. Of course that show was Rowan and Martin's Laugh-In:

Some of Owen's Laugh-In announcements not found on YouTube:

"This show was prerecorded earlier, because it didn't make much sense to prerecorded it later."

"The preceding was recorded earlier because we were ashamed to do it now."

"What you're about to see is true. [the word "false" appears on screen, hands on clock moved back] Only names and faces have been left unchanged...to protect the innocent."

And, of course the phrase I mentioned earlier, first on his radio show, "Coming to you from beautiful downtown Burbank!" 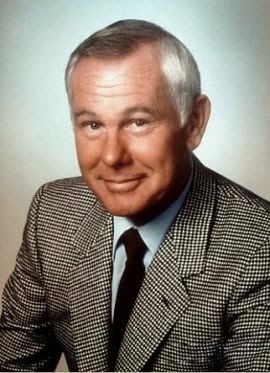 A phrase later appropriated by the fellow above.

Owens did more straightforward announcing as well, including stints on The Wonderful World of Disney and America's Funniest Home Videos.

And he did cartoons. Unlike Mel Blanc or Daws Butler, Owens didn't have a hundred different voices at his disposal. Basically he had just two--dramatic macho posturing and comedic macho posturing. 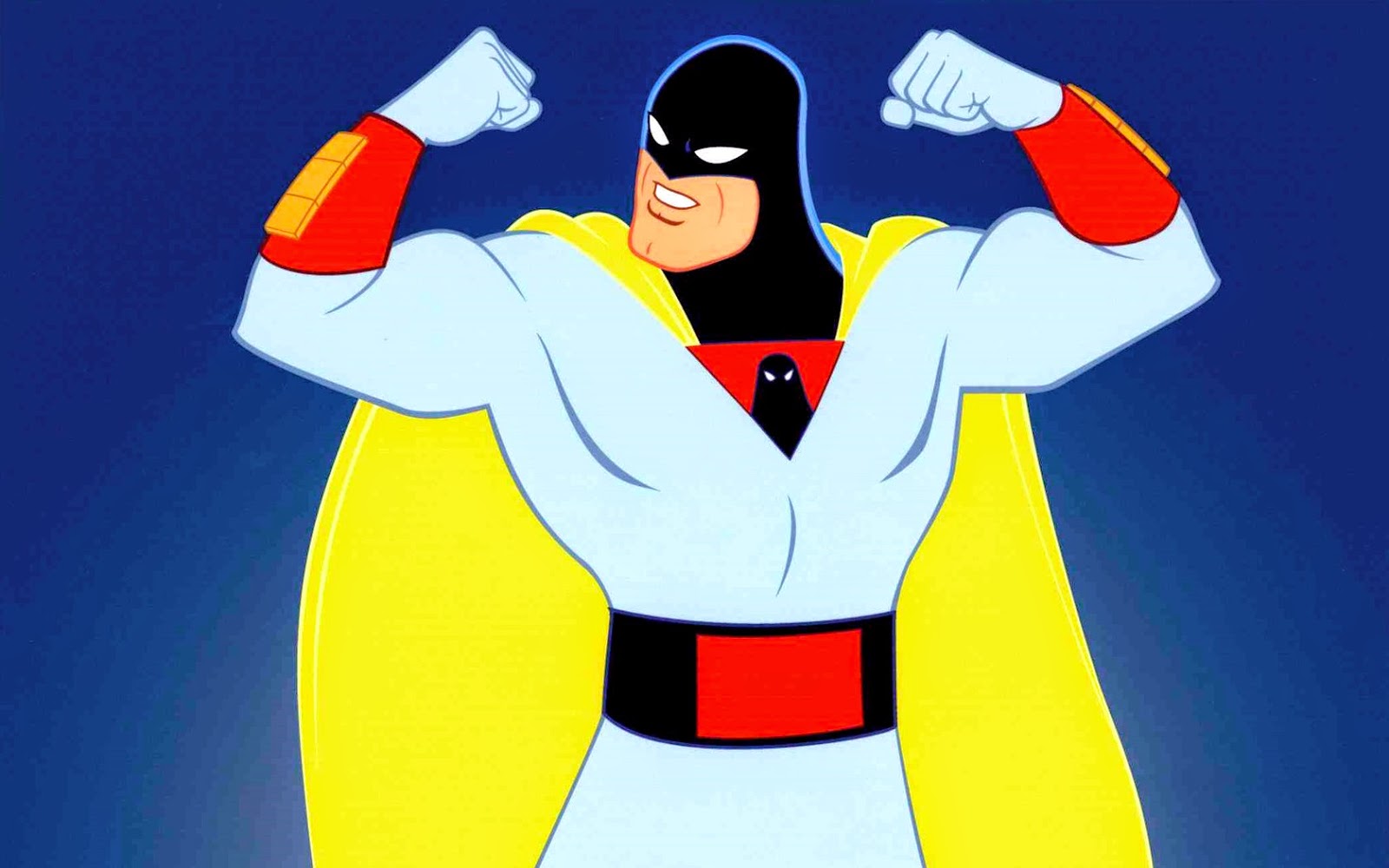 Owens didn't do the tongue-in-cheek version of Space Ghost that aired on the Cartoon Network's "Adult Swim" in the late '90s. However, his own comedic macho posturing could be heard in plenty of other places. 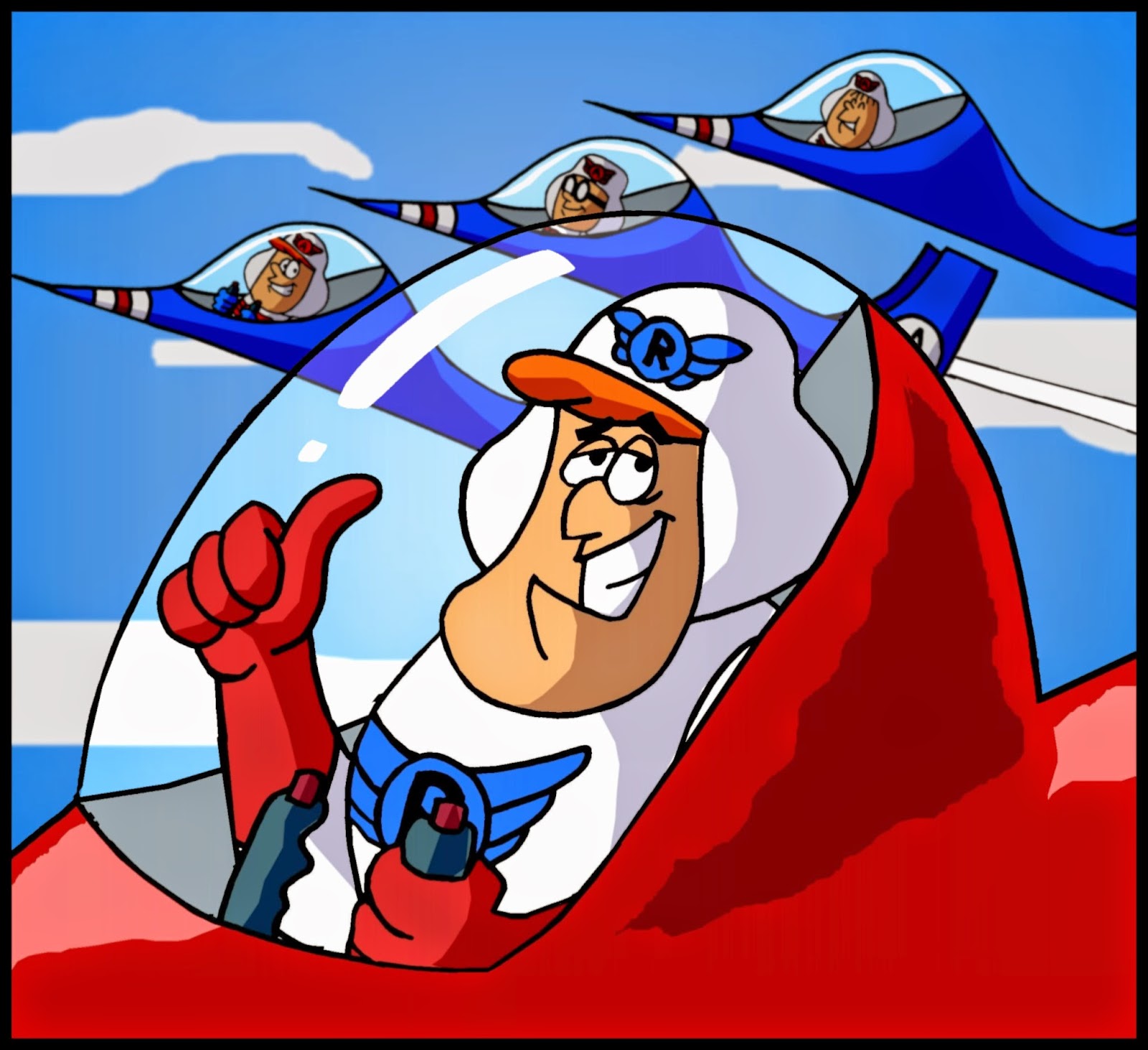 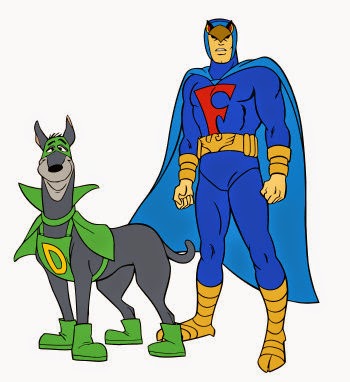 Or, a decade later, as the Blue Falcon in Dynomutt, the Dog Wonder.

Back to announcing. One of Owens most recent gigs was doing the voice-over promos for a digital network devoted to reruns Antenna TV: "Classic television, but without that musty odor!"

One last tribute from a former Laugh-In cast mate: 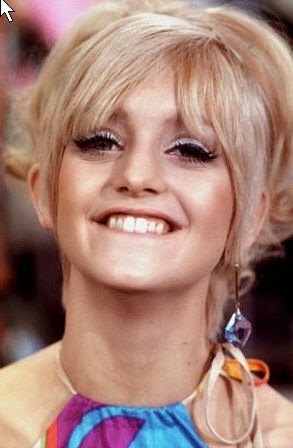 "Gary will be greatly missed...His presence of optimism and joy will live on! He was a gift to us all."

My God, what’s happening to Brian [Williams] is in the Zeitgeist...He’s trumping Bruce Jenner on social media. I mean, cross-dressing Bruce Jenner killed somebody, but Brian Williams is still trending. 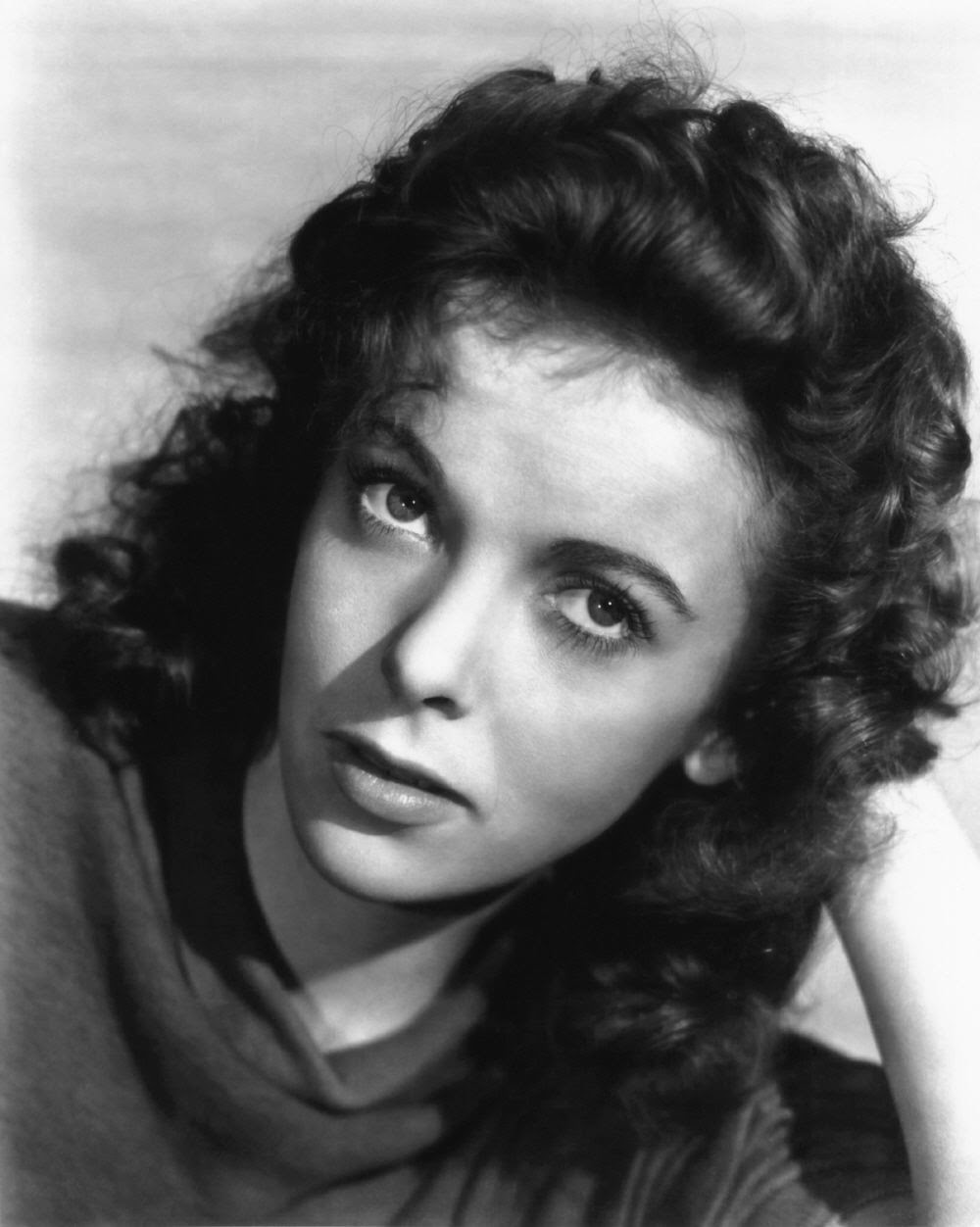 Ida Lupino was born on this day in 1918. Raised in a London acting family, she took up the profession herself and eventually landed in Hollywood. Keeping whatever British accent she may have had well-hidden in her most best-known roles, she became, in her own words, "the poor man's Bette Davis", due to the off-kilter characters she played. However, her films (a few of which were turned down by Davis) tended to be much more gritty, and she was soon a mainstay of a genre now known as film noir (French for "dark film".)


Though she first appeared on film in 1931, it wasn't until 1940's They Drive By Night that she finally became a star, thanks largely to the above nervous breakdown (which I don't believe originally was done with subtitles.)


The next year she appeared opposite another actor who took a decade to find his niche in movies, Humphrey Bogart. High Sierra was one of the earliest doomed-lovers-on-the-run films. Screenplay by John Huston.

From a story by Irwin Shaw, The Hard Way (1943) was based on the relationship between Ginger Rogers and her mother, though Lupino wasn't a mom here but Joan Leslie-as-Ginger's older sister (I imagine because the actresses were only seven years apart in age.)

In Road House (1948) Lupino got to sing the Harold Arlen-Johnny Mercer standard "One For My Baby (and One More for the Road)" You might recall that Bette Midler won an Emmy for singing this same song on the last regular The Tonight Show with Johnny Carson. I'll admit the Divine Miss M is technically a much better songstress than Lupino, but her version never led to betrayal and murder as it does in this film (though it is my understanding Carson stopped returning Ed McMahon's phone calls after a while.)


Though she more often than not played femme fatale types, Lupino got a chance to portray a more sympathetic character in On Dangerous Ground (1951). I mean, what could be more sympathetic than a blind woman? Especially when opposite another mainstay of film noir, the underrated Robert Ryan?


Ryan was not at all sympathetic in his next movie with Lupino, 1952's Beware My Lovely.

Now on to her other career. I have to jump back in time a few years. That's an actress by the name of Sally Forrest and not a pregnant Lupino in the above ad, yet the latter was very much involved in Not Wanted (1949) behind the scenes. Not content with merely acting, Lupino also liked to write screenplays, which she then produced herself. The director, Elmer Clifton, had a mild heart attack and had to leave the picture. So Lupino stepped in and finished the job, though, out of respect for Clifton, she kept his name in the credits. 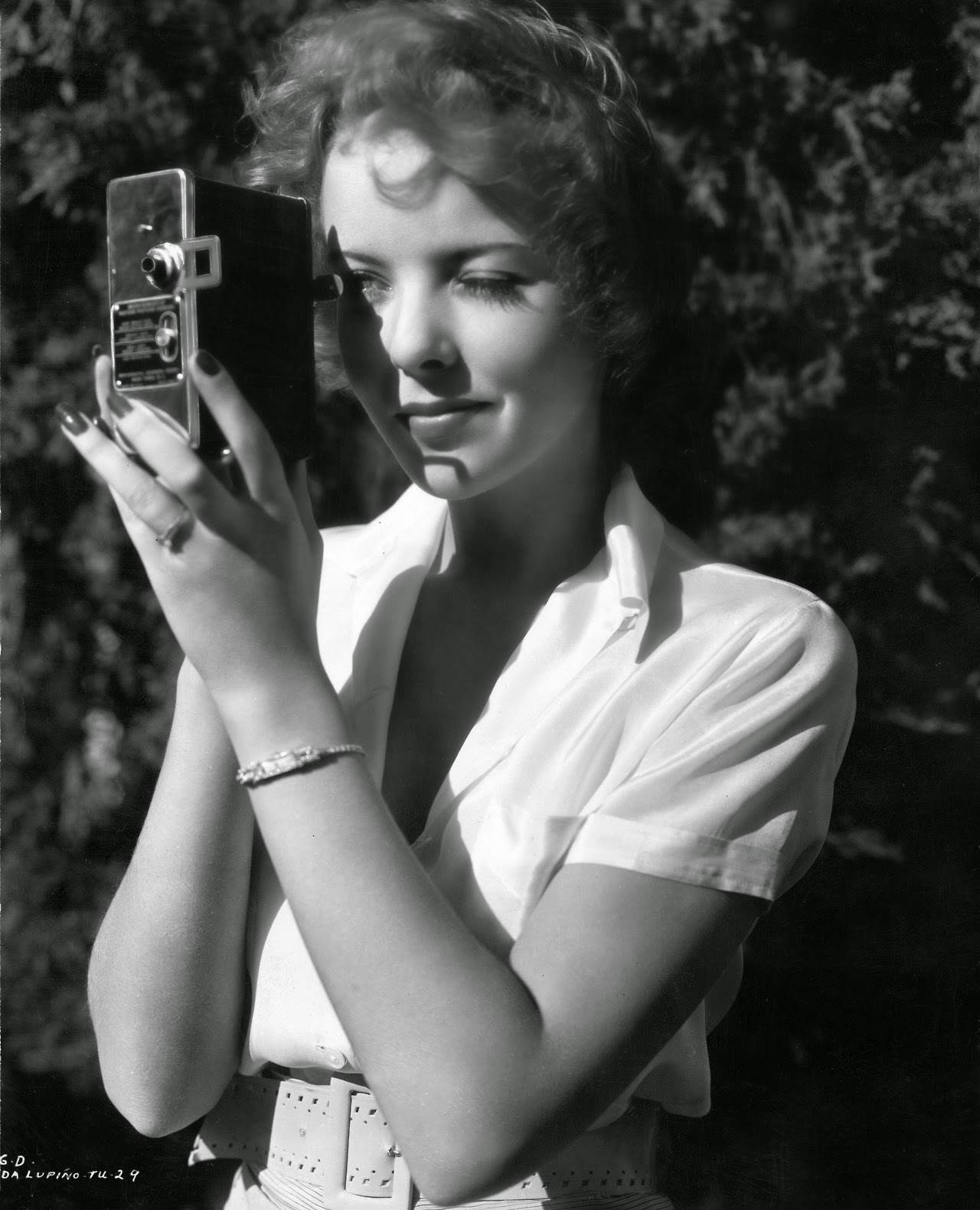 Lupino calimed she never thought about directing before, but now it was all she wanted to do. 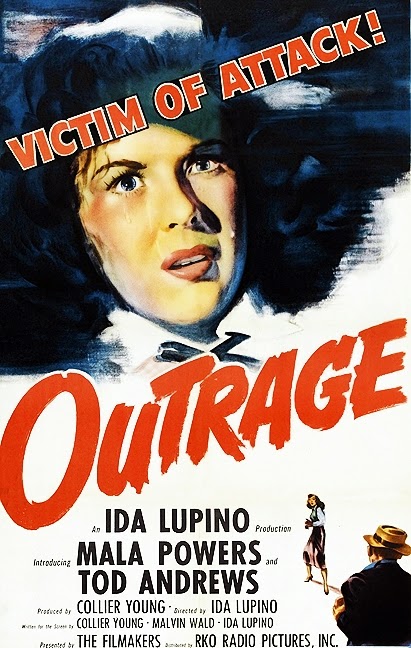 The first few movies she directed were "women pictures", though they often had provocative and controversial themes, such as the one above about rape. 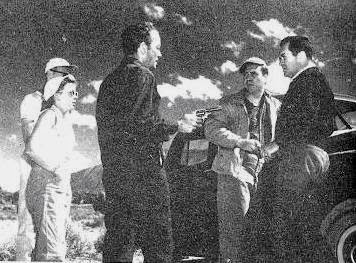 In 1953, one of the queens of film noir got a chance to direct a noir herself, the extraordinarily suspenseful The Hitch-Hiker. That's Lupino on the left in the sunglasses. 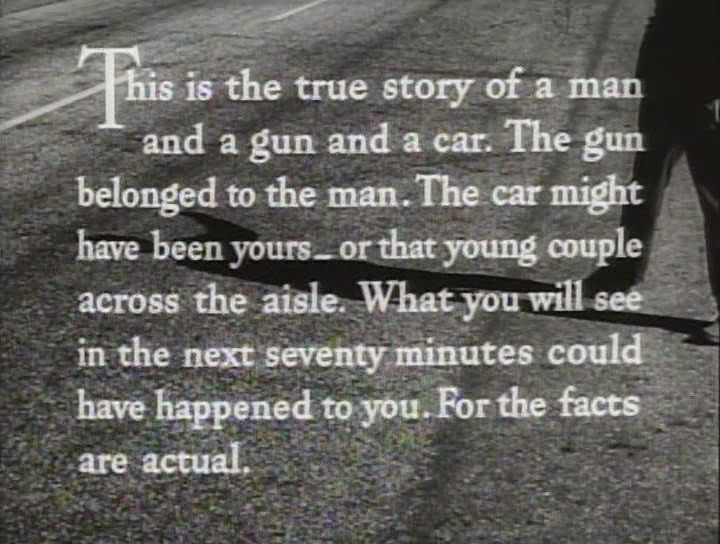 Now regarded as a noir classic, in 1998 The Hitch-Hiker was considered "culturally, historically or aesthetically significant" enough to be selected for preservation in the United States National Film Registry.

A montage of moments from The Hitch-Hiker, featuring Edmond O'Brien, Frank Lovejoy and William Talman. Perry Mason fans may remember Talman, here playing the title character, as assistant D.A Hamilton Burger. Playing a homicidal maniac in this film, he probably could have used Perry's help.

Lupino sometimes appeared in her own films. Here she plays one of the wives of the aforementioned Edmond O'Brien (a great character actor) in The Bigamist.


IdaLupino still appeared in other director's pictures as well. In Women's Prison (1955) she plays a prison superintendent who herself should have been under lock and key.


Here's Lupino in an episode of The Twilight Zone. 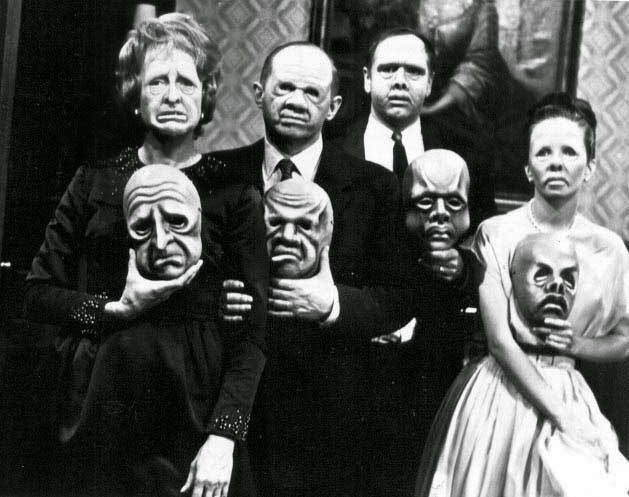 However, it was another episode she directed, but did not appear in, that's more memorable. Titled "The Mask" don't watch it if you're planning on going to a masquerade ball.

As she moved from movies to television, Lupino didn't just direct dramas, but also sitcoms...

...such as this episode of Gilligan's Island, featuring Tina Loise as Ginger, and guest star Hans Conried as Wrongway Feldman. Amusing enough on its own terms, I guess, but a long way from The Hitch-Hiker

Lupino continued to act, but as is often the case with female stars, the parts got smaller as she aged and her looks faded a bit.

Still, she got to meet Columbo.