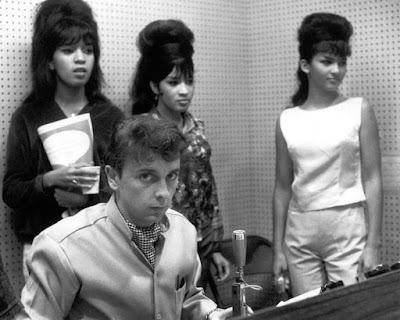 In 1994, Woody Allen wrote and directed (but did not act in) a movie titled Bullets Over Broadway, the plot of which hinged on an artistic genius who turns out to be a cold-blooded killer. Or was it about a cold-blooded killer who turns out to be an artistic genius? Whichever it was, toward the end of the film, an Allenesque character played by John Cusack declares art should not be exempt from moral concerns. With that in mind, we'll skip the artistic genius in the forefront of the above photo and look at the three young women in the background. From left to right it's Estelle Bennett, Veronica Bennett, and Nedra Talley, better known as the 1960s girl group The Ronettes. Veronica, nicknamed Ronnie (hence the group's name), was the erotically-nasal-sounding lead singer, leading the group to such chart-topping successes as "Be My Baby", "Sleigh Ride" and "Walking in the Rain". It also eventually led her and her record producer, the aforementioned artistic genius, to the alter, at which point she became Ronnie Spector, the name she's best known by today. According to Ronnie's now-all-too-credible autobiography, the marriage was a volatile one, which could have ended with her as a chalk outline on the floor. Fortunately, it didn't, though the artistic genius threatened to send a hit man (a la Chazz Palminter?) after her if she didn't agree to leave him with the entire estate after the divorce. Some years later, she and the other Ronettes successfully sued the artistic genius for back royalties, and lived to talk about it. Ronnie Spector's unforgettable voice was itself an ingenious work of art. Sometimes referred to as the bad girl of rock and roll, at least she was never evil.