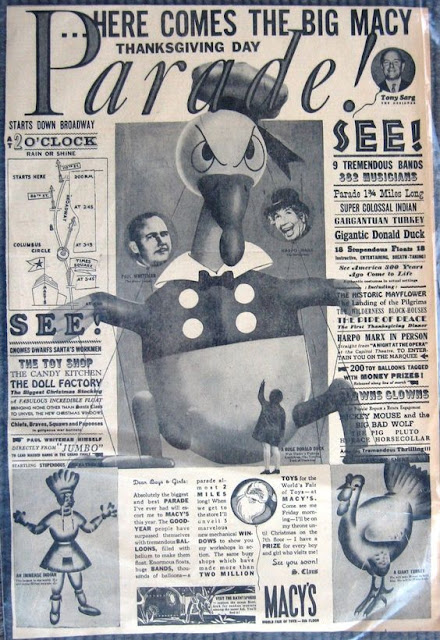 I doubt that the Macy's Thanksgiving Parade was as much an American pop culture institution in 1935 as it is today. Remember, there was no television, so that made it strictly a local event. If you wanted to see it live, you had to be living in, or at least visiting, the tri-state area (New Jersey/New York/Connecticut--though some would add the northeastern most part of Pennsylvania, in which case it becomes the quad-state area.) To encourage the natives or tourists to get out of their houses or hotel rooms on what is often a cold November day, full-page advertisements such as the one above were placed in local papers. Perusing this ad--I saw a larger version that I unfortunately can't reproduce here without taking out the sidebar--one difference from the more modern version stands out: the starting time. 2 o'clock? Are they talking PM? For as long as I can remember, going back to the days when Lorne Greene and Betty White were the parade's television emcees, it started sometime in the morning and was over by noon, and at that point the network was turned over to either the NFL or the Big Ten. Of course, no television, no football game, unless you lived near a stadium. Other than when it began or ended, the parade seems not to have changed all that much. There's floats and big balloons and marching bands and celebrities. Santa, of course, at the end, but in 1935 there were other renowned visitors that you won't see on TV this Thanksgiving, so let's see who they were back then.

In the ad's upper-right-hand corner, to the immediate right of the big exclamation point, there's a small photograph of someone named Tony Sarg. Mr. Sarg may have been well-known in his day, but he's long since fallen into obscurity (even I had to look him up, accepting all kinds of so-called "cookies" to do so.) A German immigrant, Sarg wore many hats during his colorful career, including that of animator, magazine cartoonist, illustrator, designer, and, especially, puppeteer, an art form he helped popularize in the United States, eventually becoming known as the Father of North America Puppetry. Perhaps he also should be known as the Father of North American Ballooners. Sarg was already involved with Macy's as the designer of the department store's robotic window displays when, in 1927, he was asked to come up with some ideas for the Thanksgiving parade, which got its start three years earlier. His idea was the now-familiar but back then quite novel giant balloon, which was essentially a huge helium-filled reverse-marionette, the puppeteers maneuvering the blimp from the ground up. Initially, these balloons were stock figures like toy soldiers or various animals, but as the annual parade gained in popularity, owners of copyrighted characters such as the animated cartoon star Felix the Cat took notice, and let Sarg inflate the characters for publicity's stake. More about one such character, now much more well-known than Felix, in a moment (and if you examined the above ad closely, I'm sure you've already guessed who it is.) Sarg died in 1942, and that I never heard of him is my loss. There's actually quite a bit about him online, so I don't regret accepting--HEY, WHY IS MY COMPUTER RINGING AND WHAT'S ALL THESE BOXES POPPING UP ON THE SCREEN?! 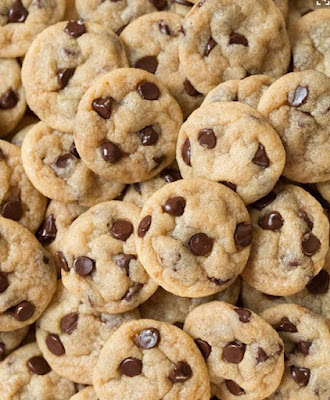 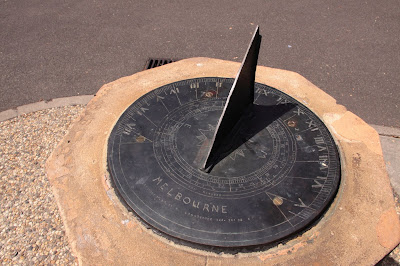 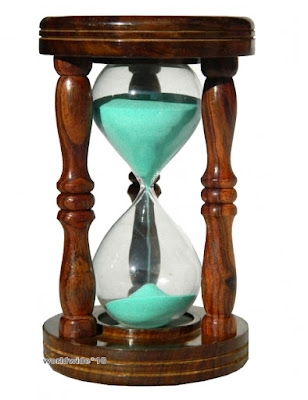 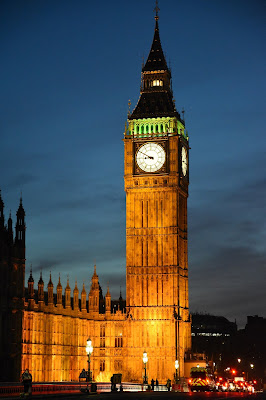 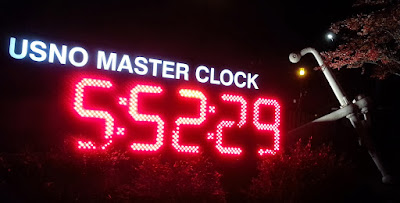 OK, I finally got all that under control. Shall we continue? 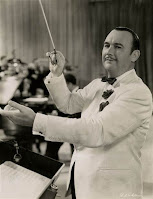 You'll have to scroll up a bit to get back to it, but to the left of that avian dirigible in that Macy's ad you'll find the photo of our next celebrity, bandleader Paul Whiteman. Him I've heard of, though I can't say I've followed his career all that closely. He was once referred to as The King of Jazz, but that sobriquet has been grumpily disputed, derided, denounced, and disproven by several generations of outraged jazz aficionados. Like Bill Haley a quarter of a century later, Whiteman was a--no pun intended (by me, anyway)--white man who made black music palatable for white audiences by draining it of its blackness. To be fair to Mr. Whiteman, I went to YouTube to sample some of his musical offerings. What I heard sounded closer to a high school marching band than anything that came from Louis Armstrong or Cab Calloway. But then I like all music, even high school marching bands (sometimes more than whatever game is being played), so I can't say I wasn't entertained. We'll just leave the musical critiques at that. John Philip Sousa's  Paul Whiteman's heyday was the 1920s, but he was still a musical force to be reckoned with in the decade that followed. At least on Broadway, where he and his band provided orchestration to several musicals, including Rodgers and Hart's 1935 hit Jumbo. The story of a struggling circus, the show featured actual circus acts, and ended each night with Jimmy Durante lying down on a stage and having his face gently tapped by an elephant's foot! (If you're familiar with the once-famous Durante's once-famous nose, you may wonder if it looked like that before the elephant tapped him. I'll have to look it up, but only if I don't have to accept any more cookies.) As for Whiteman, he was at the parade to promote Jumbo. Jimmy Durante wasn't, and that may be all for the best. Who knows how that elephant would have reacted in front of all those unruly paradegoers? 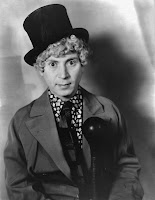 Now, if you're willing to scroll back up to that ad and look to the right of the big inflatable waterfowl, you'll see a celebrity that I'm not only aware of but am actually a fan of, as well as a fan of the comedy team of which he was a member, Harpo Marx of the Marx Brothers. He and his sibs Groucho, Chico, and Zeppo had spent the first half of the 1930s at Depression-wracked Paramount Pictures, but just now had moved to the ritzier digs of Metro-Goldwyn-Mayer, where money grew on papier-mâché trees. How long Harpo, Groucho, and Chico would be allowed to stay at those ritzier digs (for all its supposed excess cash flow, Metro balked at an extra dressing room for Zeppo) all depended on the sucess of their new movie. At Paramount, the outside world, the world of order and restraint, served merely as a backdrop to the boys' anarchic antics, but MGM exec Irving Thalberg thought there were more comic possibilities in having the brothers confront the world of order and restraint head-on. Film buffs may argue about whether the Paramount approach or the Thalberg approach produced the funnier pictures, but their first MGM outing, A Night at the Opera (only in a Marx Brothers movie could opera convincingly represent the world of order and restraint) became and would remain the boys biggest box office hit, and today is still their best-known film. But in November of 1935, that still remained to be seen, and that's why Harpo was there, to promote the flick. (Incidentally, Thanksgiving fell on the 28th that year, and Harpo's birthday was five days earlier, close enough for him to have candles in that pumpkin pie.)

Nothing to do with Thanksgiving, other than my way of giving thanks to a comedy god.

Our final celebrity is the one that dominates that Macy's ad, Donald Duck, looking as he did in 1935. Though for marketing reasons Donald was never able to replace Mickey Mouse as the studio mascot, Walt Disney realized before the moviegoing public did that Mickey's cartoons were destined to reach a creative dead-end, and so subtly, and then not-so-subtly, shifted his company's focus to the duck. As he was so often during his remarkable career, Walt was proved right. Donald was a much funnier character than Mickey, had a much more comedically-adaptive personality than Mickey. Donald appeared in many more cartoon shorts than Mickey, and throughout the 1940s and beyond, was the Disney studio's highest-grossing star. If that wasn't enough, Donald was a major star of comic books as well, in the days before that art form became solely dedicated to superheroes. However, in 1935, all that was still in the future. Donald Duck made his animated debut only a year earlier, and had yet to appear in a cartoon as anything other than a supporting player. So, it was quite an honor for him to appear for the first time in a Macy's parade (Mickey had made his Macy's debut the previous year, as had one of the Three Little Pigs and the Big Bad Wolf.)  If you look at the picture at the left, you'll see Donald had a long thin neck back in the day, and almost looks like he could be a baby ostrich instead of a duck. 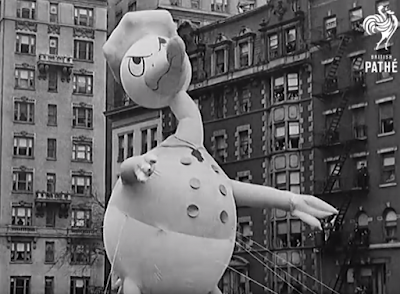 The balloon followed suit. Unfortunately, it was rainy and windy that day, causing that long neck to sway. Donald sure doesn't look happy about it, does he? This was not only the first, but also the last Thanksgiving for that particular balloon. 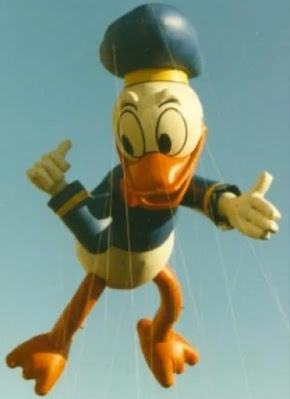 27 years later, in 1962, a new Donald appeared at the parade. The long neck had long since disappeared from the cartoons and comic books, and so too from the balloon. Donald looks pleased. This version ran until 1971, and then was retired due to wear and tear, though it did make one more appearance in 1984 to celebrate the duck's 50th birthday. Since that time, while there's been much smaller Donalds seen on floats, there's been no balloon. According to Macy's own Thanksgiving parade web site, licensing issues may be what's holding things up. Which reminds me...

I give thanks for that every time I post on this blog.
And I'm thankful for whoever drops by to look at this stuff. Enjoy the holiday, folks.
Posted by Kirk at 12:30 AM