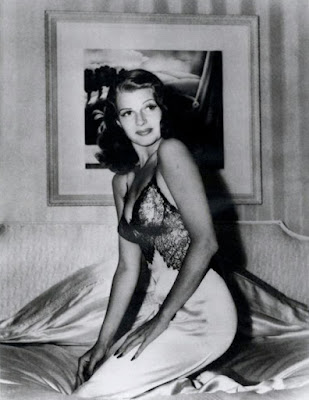 Movie star Rita Hayworth was born on this day in 1918 (she died in 1987.) The daughter of two professional dancers, she herself became a professional dancer at the age of four, appearing on Broadway with mom and dad in The Greenwich Village Follies. The family moved to Hollywood, and before she was out of her teens, Rita had signed a contract with a movie studio that eventually became 20th Century Fox. However, it was the contract that she signed a few years later with Columbia Pictures that made Rita a star. Her considerable dancing skills, acting prowess, and stunningly beautiful features made her one of the top box office draws in movie musicals throughout the 1940s. In this clip from 1942's You Were Never Lovelier, she more than holds her own along side one of the biggest movie musical stars of all time: 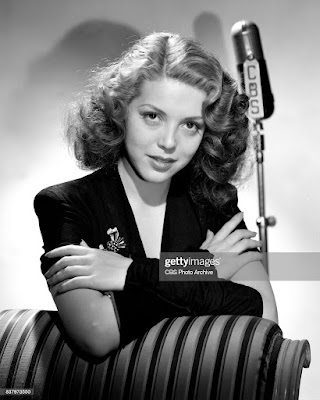 ...Big Band vocalist Nan Wynn who's doing the singing, as she had done in at least two other Hayworth musicals. 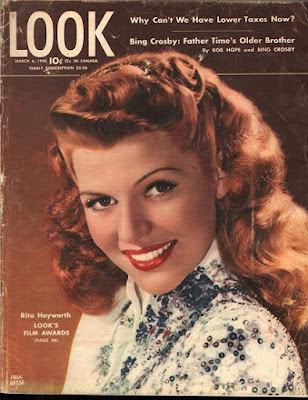 It may have been Rita's dancing (and her looks) that originally got Hollywood's attention, but her acting just got better as time went on. Soon she was in as many nonmusicals as she was in musicals, including this film noir classic: 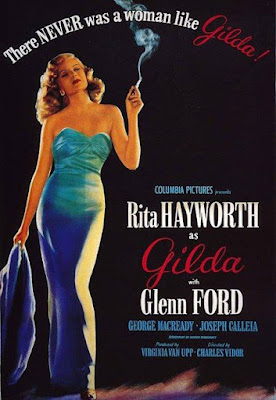 You can blame the San Francisco earthquake and the Klondike shooting on Mame, but credit... 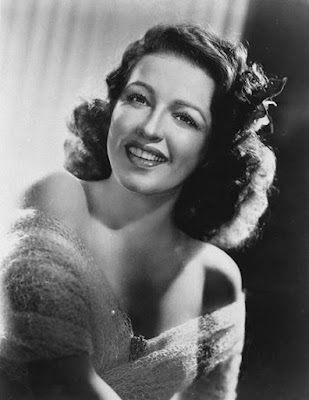 ...Anita Ellis with the vocals that matched Rita's lip movements. 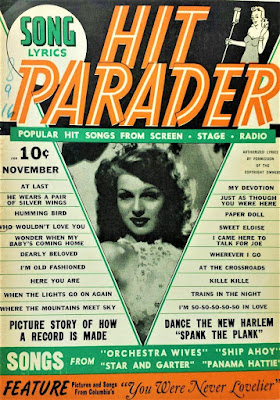 I wanted to study singing, but Harry Cohn kept saying, ‘Who needs it?’ and the studio wouldn’t pay for it. They had me so intimidated that I couldn’t have done it anyway. They always said, ‘Oh, no, we can’t let you do it. There’s no time for that, it has to be done right now!’ I was under contract, and that was it

So, does any of this matter? Was some big con job being foisted on the moviegoing public? Fictional movies are con jobs to begin with. Acting is a con job. Scripted dialogue is a con job. Anything not filmed on location, anything indoors, anything in a different historical period, anything on another planet, is a con job. Maybe con job is too harsh a word. How about make-believe? No more so than musicals which often have characters singing songs that they're supposedly making up at the spur of the moment when they could just be talking instead. As far as lip syncing goes, just about any musical made after 1935 is lip synced. Remember "Over the Rainbow" in The Wizard of Oz? No, I'm not suggesting that's not actually Judy Garland's voice you're hearing. It most certainly is, but it's not what's coming out of her mouth at the very moment she's standing on a set designed to look like a Kansas barnyard. She recorded the song a few days earlier in a recording studio so it would sound like it was recorded in a recording studio and not a Kansas barnyard or even a set made up to look like a Kansas barnyard. When it came time for the actual filming, Garland lip synced herself, which was how they did it in movies then and how they do it in music videos now. You'd have to go back to the early days of sound film to find songs sung as the camera was still rolling. The first sound picture, in fact. In The Jazz Singer, when Al Jolsen sings "Mammy" he's doing so live on film (as contradictory as that may sound.) And frankly, Al sounds better in his later movies than he does there (he comes across as less racist, too.) Once Hollywood decided that what you're seeing and what you're hearing can best be done at two different locations at two different times, it wasn't long before it occurred to somebody that what you're seeing and what you're hearing can occasionally be done by two different people as well. Rita Hayworth was a terrific dancer with a terrific screen presence whose singing wasn't quite terrific enough. Nan Wynn and Anita Ellis were terrific singers but not dancers at all and though both appeared in movies from time to time, neither had what it took to become stars. There are only so many Judy Garlands in this world. The rest is make-believe. Or, if you prefer, con jobs. 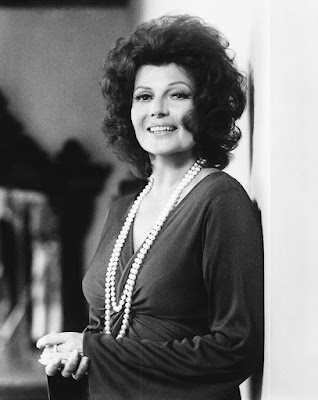 Still, you might be curious as to just what Rita Hayworth's voice did sound like. Well, she does talk in her movies. Nobody has ever suggested that was dubbed. But what about her singing? For that we'll have to turn on the TV--early 1970s TV:
Television may be even more make-believe than the movies!