People are always fascinated by the so-called golden age of musicals, but it wasn't all that great. Everything was glazed. Those movies didn't reflect reality. I was at MGM for 11 years and nobody ever let me play anything but teenagers. I was 25 years old with kids of my own and it was getting ridiculous. Publicity was froth. Everything you said was monitored. With me, they didn't have to worry. I never had anything to say, anyway. It was hard work, I had no friends, no social interaction with people my age and the isolation was tough. But I had to support my family, so I did what I was told and had no other choice.

Despite being pushed into a Hollywood career and pressures from the entertainment world, the stress of work never showed in Powell's performances which were always upbeat and energetic

(From 1954's Seven Abductees Brides for Seven Brothers. The movie wouldn't fly today, but whatever its sexual politics, Jane Powell is very good in it. And remember, she was under contract--Kirk) 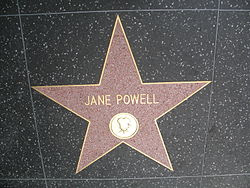