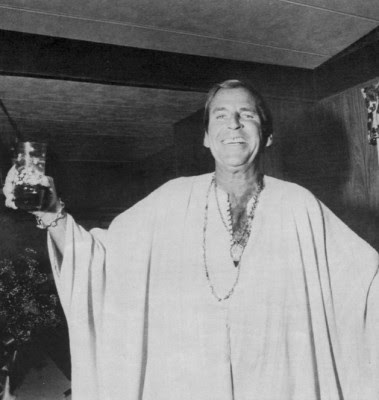 He was never what you would call a hippie, never lived in a commune, and never a counterculture figure, but comedian Paul Lynde nevertheless liked to slip on the caftan and love beads while relaxing at home.  The above photo is from 1976, so it might be said that he was a bit behind the times in his choice of attire. Except that culturally, the 1970s was a kind of sequel to the 1960s, that saw many of the accouterments of the counterculture--facial hair, sideburns, tie-die shirts, jean jackets--adopted by the mainstream. That wasn't quite true for the male caftan, but the Maharishi Mahesh Yogi did wear one, and he remained a highly sought-after figure. In fact, as traditional church attendance declined, Eastern philosophy, Eastern religion, and Eastern mysticism continued to make inroads into the middle-class. However, I can't find any evidence that Paul Lynde's interest in the mysterious East went beyond the sartorial. More telling is that glass he's holding in his hand. By almost all accounts, Lynde sought meditative transcendence in alcohol, which he consumed in great quantities. Unfortunately, according to these same accounts (which come from many of his closest friends), he could be a mean drunk, so there was little peace, love, and happiness found there. The alcohol abuse reached its apex with a much-publicized run-in with a cop outside a Salt Lake City gay bar while Lynde was in town to tape The Donny and Marie Show, causing him to not just lose that gig (which, given the brother-sister duo's Mormon upbringing, had been a surprisingly steady one up to that point), but other work as well. Accustomed to a decidedly non-ascetic standard of living (caftan and love beads notwithstanding), and not wanting to give that up, Lynde around 1980 went on the wagon, and stayed on the wagon, until his death two years later at the all-too-young age of 55. Yet his was hardly a wasted life. This being Pride Month, the question must be asked: did Lynde contribute anything to the cause beyond a headline in the National Enquirer? True, there was no public revelation or true confession, no partaking in any post-Stonewall political activity, but by demonstrating that a flamboyantly fey personality and an LGBTQ-laced sense of humor were no impediments to TV stardom, Lynde in his own subversive way helped undermine the Sexual Orientation Establishment of his era. Paul Lynde may not have been a hippie, but neither was he a Hollywood square.