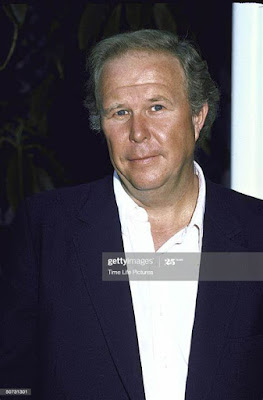 Ned Beatty spent the first decade and a half of his acting career in regional theatre, usually in his native Kentucky, but with brief stints in Virginia and Indiana. In 1972 Beatty went from regional theatre to Major Motion Picture when he was tapped to play the unfortunate Bobby Trippe in Deliverance. Based on James Dickey's novel it tells the story of four Georgia businessmen whose canoe trip down a river goes horribly wrong when they encounter two psycho hillbillies, one of whom rapes Beatty's character in what's often described as one of the most terrifying scenes ever depicted on film (at least the males in the audience found it terrifying. Women, of course, are raped on screens big and small all the time, and I wouldn't be surprised if a few female moviegoers took one look at what was happening to Beatty's character and thought, what's cinematically good for the goose is good for the gander--or squealing pig.) The scene's very sensationalism guaranteed Beatty's stardom, and frankly he deserved it because he was a damn good actor, no matter how lurid the circumstances. But it was a qualified stardom. Though some toothless hillbillies may beg to differ, Beatty didn't have leading man looks, and so had to contend with mostly supporting roles, of which there were many. Among the highlights (meaning I've seen them): a corrupt Southern sheriff in 1973's White Lightning (which reunited Beatty with Deliverance costar Burt Reynolds); a racist northern cop in the 1973 made-for-TV movie The Marcus-Nelson Murders (though not conceived as such, ended up being the pilot for Kojak); a chaplain in the 1975 made-for-TV movie The Execution of Private Slovik; a Nashville songwriter in 1975 feature film W.W. and the Dixie Dance Kings (again starring Reynolds); also in Nashville, Nashville, Robert Altman's masterpiece, where Beatty played Lily Tomlin's husband and Henry Gibson's lawyer; that same year another made-for-TV movie playing another Southern law officer, Attack on Terror: The FBI vs. the Klu Klux Klan, and on the sitcom (rather than the movie) MASH portrayed a visiting chaplain who felt Father Mulcahy's evangelism wasn't up to snuff.  In 1976 he memorably played a chairman-of-the-board who preaches the virtues of capitalist degradation in the feature film Network. That same year he was one of Woodward's and Bernstein's informants (but not Deep Throat) in All the Presidents Men; and a FBI agent in Silver Streak. In 1978, he played Lex Luthor's goofy henchman in Superman: The Movie (called that so you wouldn't confuse the multiplex for a comic book.) On TV, a distraught father of a dead soldier in Friendly Fire. In 1979, he's not distraught but instead a grumpy middle-aged middle-class father whose house is targeted by the Japanese in the World War II homefront comedy 1941. Moving along, there's two more Burt Reynolds movies Stroker Ace (1983) and Switching Channels (1988). There's The Toy (1982), Back to School (1986), and The Big Easy (1987), Prelude to a Kiss (1992). On the small screen, he had a recurring role as Dan Conners father on the sitcom Rosanne, and played a police detective on Homicide: Life on the Street (a very good show I should have spent more time watching, and am not sure why I didn't.)

Bobby Trippe's voyage down the Cahulawassee  River might have gone horribly wrong, but for Ned Beatty it appears to have been nothing but smooth sailing.

Brokeback Mountain it's not.