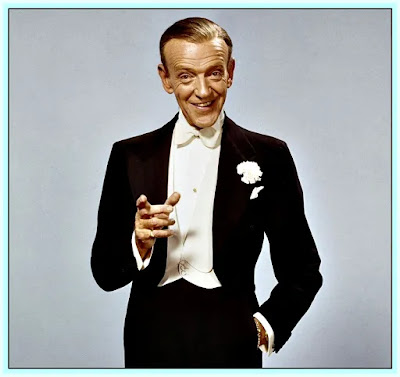 Actor, singer, and, above all else, dancer Fred Astaire was born on this day in 1899 (he died in 1987.) He had many dance partners during his long career, starting with his sister Adele when they were both still kids. Besides her, there was Eleanor Powell, Paulette Goddard, Rita Hayworth, Judy Garland, Ann Miller, Vera-Ellen, Betty Hutton, Jane Powell, Cyd Charisse, Leslie Caron, Audrey Hepburn, Petula Clark, and, of course, Ginger Rogers, with whom he danced with through ten films. Yet when asked in 1973 who he thought was his best partner, Astaire named none of those well-known ladies but instead a woman who may not be as famous today as she suddenly found herself to be one October night in 1958: 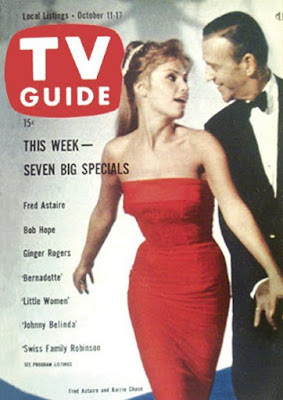 "Barrie Chase is the best partner--she's the latest partner that I've had, and believe me, that girl has got it--that girl can dance."
Fred Astaire's movie career was winding down toward the end of the 1950s. The Band Wagon (1953), Funny Face (1957), and Silk Stockings (1957) are today all considered film classics, and yet lost money upon their box office releases. Part of it was these movies were very expensively-made, and couldn't just be popular but needed to be very popular to turn a profit. Another was that teenagers were making up a bigger share of the moviegoing audience, and they wanted rock 'n' roll, not the Tin Pan Alley stuff that had provided the background music for Fred's fancy footwork. Now, these teenagers' parents did still want that Tin Pan Alley stuff, but they had stopped going to the movies, preferring to stay home and watch TV.  And TV was where the 59-year-old Astaire's immediate future lie. It wasn't going to be a regularly scheduled series, though, but one of those things that occasionally replace regularly scheduled series: a special. To make sure this special wouldn't be confused with a run-of-the-mill variety show, producer-director-writer Bud Yorkin convinced Astaire that it should be him alone with no guest stars. Astaire agreed that there should be no guest stars, but he wasn't about to dance every dance solo. So he went out and got himself a partner. 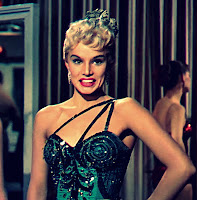 The 25-year-old daughter of a Hollywood screenwriter, Barrie Chase had appeared in the chorus lines of several 1950s movie musicals, including White Christmas, Hans Christian Anderson, Brigadoon, Pal Joey, and two movies with Fred Astaire himself, the first of which was Daddy Long Legs. Astaire later professed not to have first noticed her in DDL, but, ironically, on the set of a Gene Kelly movie, Les Girls, where he spotted her through an open door at MGM. Impressed, he gave her a small, uncredited part in the aforementioned Silk Stockings, where she momentarily performs the can-can in front of three decadent Bolsheviks. It doesn't sound like much of a breakthrough, and it wasn't, but then came An Evening with Fred Astaire. Here's Fred and Barrie in Techni--no, in early color videotape, but it holds up just as well:

I love that finger-snap of resignation at the end. For all his expensively-tailored duds, Astaire had a touch of the everyman about him.

Fred has better luck with Barrie in this clip, but it's in the oddest place. Jazzman Jonah Jones explains: 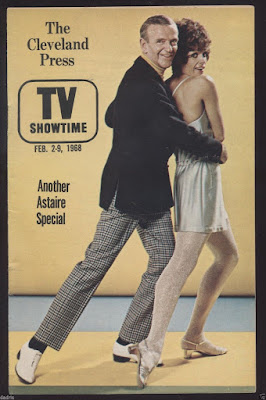 An Evening with Fred Astaire was one of the great television successes not just of 1958 but the 1950s as a whole. In addition to winning its time slot in the ratings, it won an unprecedented nine Emmys, including a controversial one for Astaire for Best Actor (in his defense, Fred rhetorically asked, "I'm an actor, and this Emmy is for a performance by an actor, isn't it? When I do a difficult pantomime in a dance which tells a story, what do they think it is? Tiddlywinks?") The special was much written about in its day, and when it was rerun three months later, the rerun won its time slot! Between 1959 and 1968 there were three more television specials with Astaire and Chase. Also, the two danced on the 1960s variety show Hollywood Palace, and acted and danced together on the anthology show Bob Hope Presents the Chrysler Theater in a comedy story titled "Think Pretty." In 2017, the then-83-year-old Chase discussed her famous dance partner in a BBC interview:

An 83-year-old woman in a miniskirt and stilettoes?! In the comment section of the YouTube page from which I snagged this video, the consensus seems to be, if she still got the legs for it, why not? You can certainly see where all those years of dancing paid off.

Barrie Chase's time in the limelight lasted just under 15 years. In 1972, she married for a third time to a doctor and, quite voluntarily, left show biz, left fame, to raise a family. The nearly 50-year absence has taken its toll on her name recognition, I'm afraid. Her legacy is now cemented to just one phase of Fred Astaire's legendary career. It's all they asked her about in that BBC interview. That's not the case with Ginger Rogers, who died at 83 in 1995. When she gave interviews late in life, sure, she was asked about Astaire--that was unavoidable--but there were always questions left over about the many things she did on her own, such as the Oscar she won for Kitty Foyle, her appearance alongside Katherine Hepburn in Stage Door, and the classic romantic comedies Bachelor Mother and The Major and the Minor. I suspect that if Barrie Chase had hung around a little longer, like Rogers she would have been forever associated with Fred Astaire, but not exclusively so. Barrie Chase did do things on her own. As with other dancer-singers of that era, like Ann-Margaret and Joey Heatherton, she had her own nightclub act. She danced solo on a Hollywood Palace in which Astaire didn't appear. She did a few dramatic roles, most notably, and most credibly, as an unfortunate young woman who is brutally raped by Robert Mitchum in the original 1962 version of Cape Fear. If you prefer to see her in much lighter fare, she's the last surviving credited cast member of... 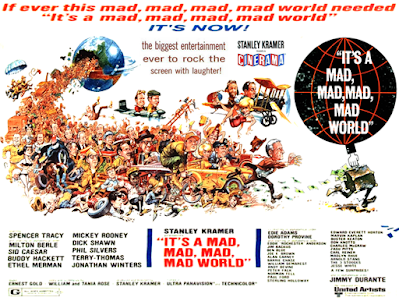 Though he was a lot closer to her in age than Astaire, the dance team of Shawn and Chase just never took off.