I know that I would be a liar or a fool if I said that I have the best of the three Apollo 11 seats, but I can say with truth and equanimity that I am perfectly satisfied with the one I have...This venture has been structured for three men, and I consider my third to be as necessary as either of the other two.

-- Michael Collins, who stayed behind on the command module Columbia as fellow astronauts Neil Armstrong and Buzz Aldrin descended to the surface of the moon in the lunar lander Eagle. Orbiting the moon all by himself 14 times, Collins was cut off from all communications with Earth for about 45 minutes every time the Columbia entered the natural satellite's renowned dark side. Even when Collins was back in contact with Earth, he was not among the estimated 600 million television viewers who got to see Armstrong and Aldrin traipse about the Sea of Tranquility. Still, he was there to pick the two men up when the Eagle bid adieu to the moon, all three returning safely to Earth. Deke Slayton, at the time the director of Flight Crew Operations, offered to put Collins back into crew rotation afterwards, which probably would have allowed him to walk on the moon himself on the final lunar mission in 1972. But having already been in space twice--he also had been a member of Gemini 10, where he had performed a spacewalk--Collins didn't want yet another long absence from his family that training for such a mission demanded, and so resigned from NASA. In his post-astronaut life, Collins wrote a best-selling autobiography, worked as an assistant secretary for the State Department, was the first director of the National Air and Space Museum, was made a vice-president of an aerospace company, and opened his own consulting firm. Aside from all that, he basically kept out of the spotlight, as he considered  celebrityhood rather silly. Nevertheless, he had his own Twitter account, and, a little more than a week ago, left this tweet: 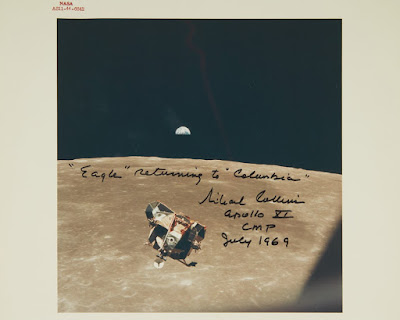