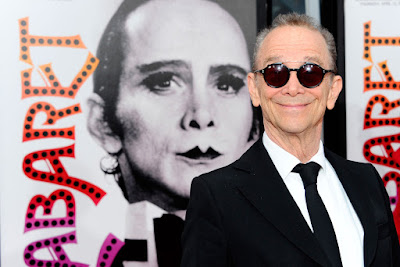 Actor-singer-dancer Joel Grey was born on this day in 1932. Diana Ross and James Coburn invite the Cleveland native up on stage in this clip from the 45th Academy Awards (held in 1973 for movies made in 1972):

It was an unusual Oscars presentation that year. There was Native-American activist Sacheen Littlefeather famously, or, in the subsequent onstage opinions of Raquel Welch and Clint Eastwood, infamously, turning down the Best Actor award on behalf of no-show Marlon Brando. Eastwood himself was on stage twice that night, planned and unplanned. Planned was his reading of the Best Picture nominees (The Godfather, starring Brando, won.) Unplanned, Eastwood was pressed into service earlier that night when it looked like Charlton Heston might not show up to read the voting rules because of a flat tire on his way to the Dorothy Chandler Pavilion (after a few Ten Commandment jokes obviously not written with Eastwood in mind, Heston showed up and took over.) Of course, neither Littlefeather or Eastwood is in the above clip. So what I find unusual is that year's Oscars set direction. I don't mean who won for Best Set Direction. I mean Diana Ross' and James Coburn's immediate surroundings. They look like they're backstage or in the wings or something, don't they? That was kind of the idea. The opening musical number had a plainly-dressed Angela Lansbury informing us, via song and dance, that moviemaking is really just another job and the stars are merely working stiffs. It's actually an entertaining little number, and I might show it here sometime, that ends with Lansbury, now all gussied up in a glamorous gown, singing "make a little magic." Except once she's finished, we're stuck with the nonmagical faux-backstage set, and have to rely on occasional shots of the star-studded audience for gussied-up glamour. Unless those stars come up on stage to accept or hand out awards. And just how glamorously gussied-up do you find Ross (who had hoped to both accept and hand out but ended up only doing the latter) in that tuxedo? I have absolutely nothing against unisex fashions but the normally super-femme Miss Ross is the last person who I would expect to see take up crossdressing. But Ross is no Marlene Dietrich. Rather than provocative, she comes across as merely a cute curiosity. Still, it's appropriate that she would be dressed such a way when presenting an Oscar to Joel Grey, who himself was both provocative and unisexual in the film that won a whole bevy of Oscars that night. 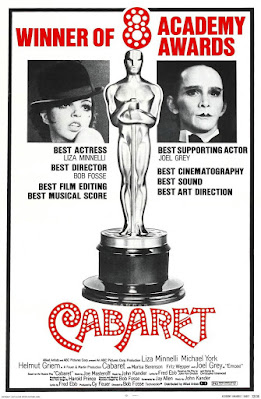 Another one of those Oscars went to Liza Minnelli (she beat out the aforementioned Ross, nominated for Lady Sings the Blues), allowing her to finally, and deservedly, emerge from the shadow of her famous mother. I'll examine her signature performance at some later date. For now the man of the hour (or for however long it takes you to peruse this post) is Grey. A mainstay of the New York stage for about 20 years at that point (despite looking like he was still in his 20s), the Cabaret win made him, for a time, a household name, though the character he played, the nameless Master of Ceremonies of a between-the-world-wars Berlin nightclub, isn't one you would have found hanging around very many American households. Watch:

The movie does not exploit decadence; rather, it gives it its due. 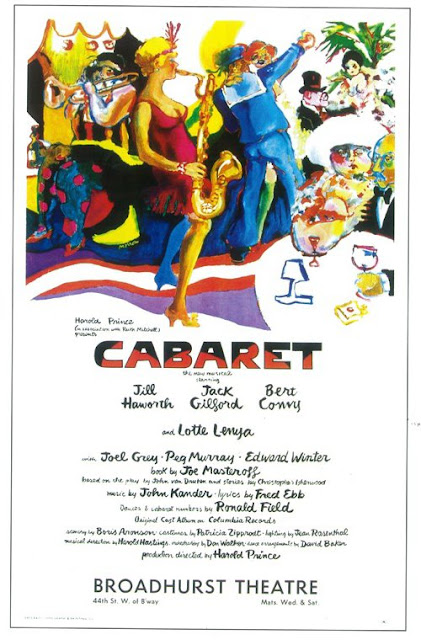 Before it was a movie musical, Cabaret was a stage musical (and before that a stage play and before that a book of interrelated short stories by Christopher Isherwood.) Among its feature players was a woman who a few years earlier tried but failed to kill James Bond in From Russia with Love, a man who at the same time he was appearing in hit Broadway musicals also appeared in a series of Cracker Jack commercials on TV, a woman who spent the 1970s appearing in British-made horror films and doing guest shots on American TV crime shows like Baretta and Vega$, and a man who later hosted the game show Tattletales (I admit to being fascinated by performers career arcs.) And then there's Joel Grey, the only one to appear in both the stage and film versions. And for good reason. Though on the original Broadway poster his name appears below the actors I just mentioned, the critics of the day praised his performance, which brought audiences into the theater, and he was and is seen as the main reason the stage version became a hit in the first place.

Here's a blurry clip from the 21st Tony Awards (held in 1967 for productions that debuted in 1966.) That's Larry Hagman's mom who introduces a legendary husband-and-wife dance team (though not so legendary they didn't eventually divorce), who in turn have come up on stage the then-35-going-on-19 Grey:

Joel Grey more-or-less reprised his Master of Ceremonies role for television in 1976. The atmosphere is much less decadent, but, to paraphrase Ms. Kael, it gives whimsy its due:

I have a sudden craving for a Kit Kat bar.