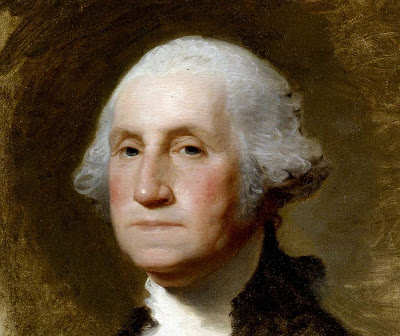 Stories vary. Some say it was when George Washington relinquished control of the Continental Army at the end of the Revolutionary War. Others say it was about 15 years later when he decided not to run for a third term as president. Either way, the man was voluntarily giving up power at a time when such a thing, however laudable, was thought to go against human nature. When word of Washington's decision got back to George III, the British monarch is said to have remarked, "If he does that, he will be the greatest man alive." 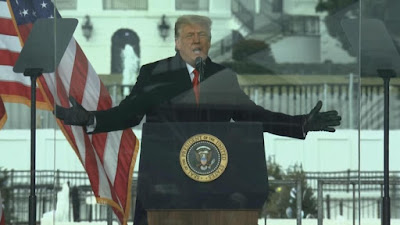 As the events on 1/06/2021 have demonstrated, this is NOT the greatest man alive. 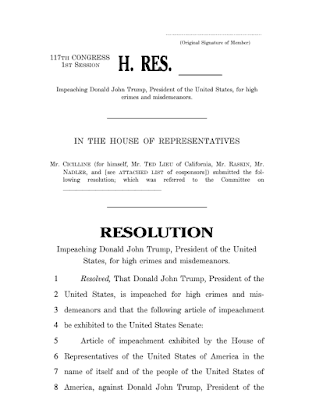 Contrary to popular belief, an impeachment in and of itself doesn't remove a president from office. If that were the case, Mike Pence would have been president for the past year, as Trump was first impeached at the end of 2019. Also, the previous century would have ended with a President Gore in the Oval Office. No, according to the Constitution, an impeachment is simply the House of Representatives charging a sitting president of high crimes and misdemeanors, followed by a trial in the Senate. Sure, it seems unlikely that any such trial would conclude before January 20, when Joe Biden is suppose to assume the duties of president, but remember, removal from office is hardly the only punishment for sedition. What about this 25th Amendment they keep talking about? That calls for the removal of a president, temporarily or otherwise, if the vice-president and the majority of the cabinet deems that person unfit to serve for some reason. So far, Mike Pence has signaled that that's not going to happen, but who knows, he could change his mind if Trump, says, orders an air strike on the Palm Beach headquarters of the PGA. Finally, a president can just decide to take an early leave from office, as happened some 45 years ago:
How dignified he looks. Such poise. Such grace under--WAIT A SECOND! What am I saying? This is Tricky Dick we're talking about! 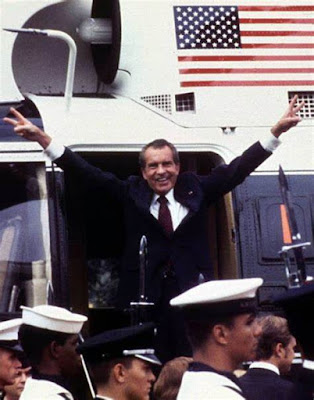 Compared to last Wednesday's criminality, the Watergate break-in might as well have been a parking  violation. And remember, it happened after-hours, when everyone had gone home for the night. So it was much less lethal. 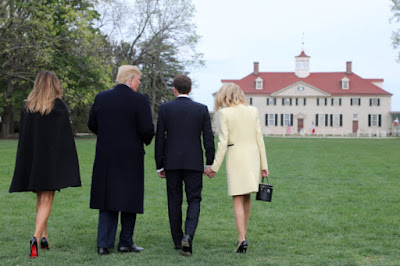 Let me get back to George Washington. On a visit to Mount Vernon with France's President Macron, Trump is said to have wondered aloud why Washington didn't name his home after himself. Trump, after all, was always naming things after himself. Towers, hotels, casinos, golf courses, even at one time a brand of vodka. And while he denied asking that his face be added to Mount Rushmore, he nevertheless tweeted that he thought it would be a good idea. George Washington, on the other hand, never asked that a city on the Potomac or a state sandwiched between Oregon and British Columbia be named after him. Nor did he ask that his face be put on Mount Rushmore, or the dollar bill, quarter, or on a postage stamp. With the exception of the city on the Potomac (he chose the location), all those things had been named and images of him placed after he died. Washington was content to let his achievements speak for themselves. Trump was incapable of such contentment, and had no such accomplishments. In the final analysis, Trump is neither a conservative or a liberal, a right-winger or a left-winger, a Republican or a  Democrat. His only ideology is--well, I'll let Irene tell you:
OK, that's a bit unfair to Ms. Cara.
As for Donald Trump, instead of fame, I suspect from here on in, he will have to settle for infamy. Baby, remember his name.
Posted by Kirk at 12:00 AM