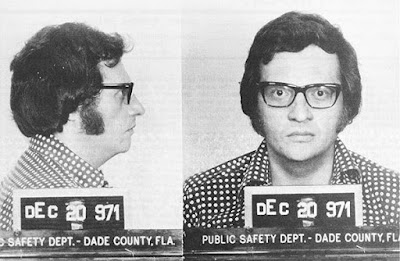 Though he was from New York and had the accent to prove it, Larry King's broadcasting career began in South Florida, where he hosted various local radio and TV interview shows. He was helped in this regard by Jackie Gleason, whose 1960s network variety show was taped in Miami Beach, which meant the steady stream of Hollywood stars who came to town to appear on Gleason's show would also drop in for a chat on one of Larry's. He got good ratings doing this, and one would think that would lead to higher earnings. Yet when a shady businessman gave the gravelly-voiced broadcaster some money to get him access to either New Orleans District Attorney Jim Garrison or Attorney General John Mitchell (stories vary), Larry felt financially constrained enough to pocket the dough instead. To make matters even more confusing, Larry also was said to have passed some bad checks. He was arrested for grand larceny, but the charges were eventually dropped, thanks to some legal maneuvering by his lawyer that ran out the clock on the stature of limitations. Rehired by the television and/or radio station that fired him in the wake of his arrest, Larry's popularity grew. The Mutual Broadcasting Network took notice, and gave him a late night/early morning radio show that also proved very popular. Ted Turner took notice, and put Larry on CNN, where he thrived for 20 years. 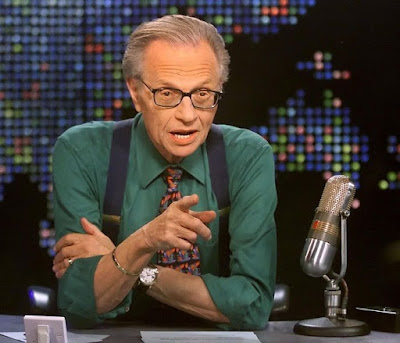 I make no great claims for Larry King as an interviewer. He was often tougher on people who called into his radio show then he was with the public figures who were his guests. He at times seemed ill-informed--which he actually took pride in because he felt it gave the audience someone they could identify with. If falling for some celebrity's or politician's line of BS is your idea of being at one with a "journalist", then I guess you found your broadcast soul mate. Just don't write him out a check, as I don't think the statute of limitations has changed much since 1971. All this sounds like I didn't like Larry King very much, doesn't it? In fact, I was a fan. If nothing else, King was fun to listen to and watch, and that is something. King also could be very funny at times, and intentionally at that. More than anything else, King was different. Not different from someone you might find working behind the counter of an adult book store (which reminds me, he was married eight times to seven women) but different from someone you would see on TV. And like Barbara Walters, he could come up with an interesting interview almost in spite of himself. Like this one here:

You wouldn't expect that from Lester Holt, would you? Rest in peace, Larry.