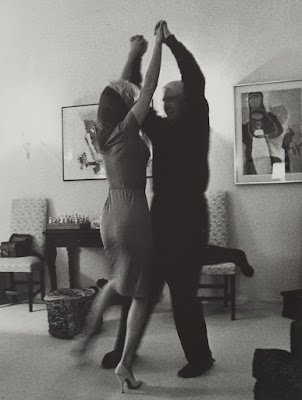 Can you dance like the wind is pushing you?
Can you dance like you are pushing the wind?
Can you dance with slow wooden heels
and then change to bright and singing silver heels?
If you ask the two people in the photo at the top of this post, the answer would seem to be "Yes". Such nice feet, such good feet. But whose feet? And not just their feet, either. Look at those arms! To paraphrase Hank Williams Jr, are you ready to rhumba? Or is that a samba? A tango? Waltz, maybe? My guess is generic ballroom. Or generic rock 'n' roll. Whatever it is, that's certainly not Gene Kelly on the right. So who is it? 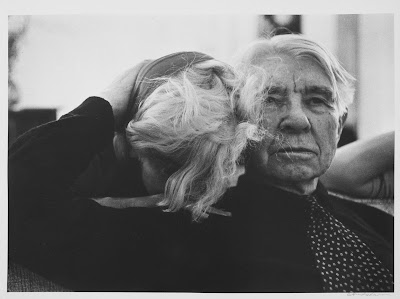 Poetry is an Echo, Asking a Shadow to Dance

He would know. That's Carl Sandburg, who spent the first 23 years of his life in the 19th century, but left his mark on the 20th. He worked as a bricklayer, drove (reins, not steering wheel) a milk wagon, heaved coal, worked as a farmhand, assisted a barber, and shined shoes in a hotel, all the while dabbling in radical politics, which eventually netted him a job as a secretary to Milwaukee's left-of-center mayor. Later, he was hired on at a Chicago newspaper, back in the days when you didn't need a journalism degree (and newspapers were still hiring on in the first place), where he reported on city politics, crime, labor issues, and--they had them back then, too--race riots. He also reviewed films, one of the first people to do so in the 1910s. That's how he paid the bills, but in his spare time he wrote poetry. His fourth collection, but first by a mainstream publisher, Chicago Poems,
came out in 1916, and went a very long way towards establishing him as one of the nation's leading poets. As the title suggests, these were poems about the Windy City, but in one of those poems, he arguably came up with a better nickname "The City of the Broad Shoulders". However, Sandburg didn't just limit himself to urban life. 1919 saw the publication of Cornhuskers, which won him a Pulitzer. During the Great Depression, he came out with a book-length poem The People, Yes, a paean to democracy and the resilience of Americans during difficult times. Despite all this verse, Sandburg hadn't forgotten prose. An admirer of Abraham Lincoln (as was another poet, Walt Whitman, whose life overlapped Sandburg's by 14 years), he wrote a six-volume, two-part biography of the Great Emancipator. The Prairie Years was published in 1926, the second, The War Years, in 1939. Despite some criticism that the works were more literary than scholarly, they were immensely popular and The War Years won Sandburg another Pulitzer, this time in History (no doubt jurors had one eye on the situation in Europe when they made their decision. If worse came to worse, Honest Abe might serve as a good role model for a wartime president.) If all that wasn't enough, Sandburg was arguably the first celebrity folk singer, prefiguring both Woody Guthrie and Pete Seeger by about a decade-and-a-half. He often brought along a guitar to poetry readings, and in 1927 published The American Songbag, a compilation of folk songs. Keep in mind this was folk music in the original sense of the term. Not newly-written, copyrighted songs called "folk" simply because of the sparse arrangements, but noncopyrighted songs with no known composer to collect the royalties (though since the book was a best-seller that went through several printings, I'm sure Sandburg himself earned a royalty or two, but I wouldn't begrudge him that.)  The aforementioned Seeger saw American Songbag as a landmark that helped spark the folk revival movement of the 1930s (which sometimes gets overshadowed by the more Top 40 one of the '50s and '60s.)  On the 150th anniversary of Lincoln's birth in 1959, Congress met in joint session to hear actor Fredric March read from the Gettysburg Address, after which Sandburg read a few selections from...um...hold on a second... 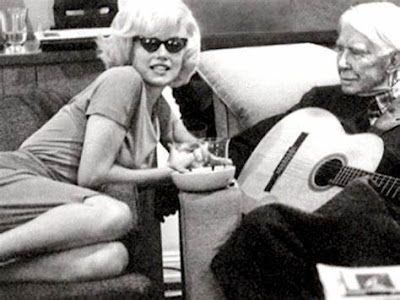 There's that blonde again. Who is she? Maybe if we can get her to take off those dark glasses.

That's right, it's Marilyn Monroe. The story goes that the two first met around 1960 when Sandburg was living in Hollywood working as a film consultant (he would have been in his early 80s at the time, so you can't accuse Tinseltown of ageism, at least not back then.) Thinking she was out of town or something, the studio gave him her dressing room to use as a makeshift office, but she turned up anyway. Rather than get pissed, she was delighted to find the iconic poet there, which shouldn't come as a surprise. Once her fame had been firmly secured, Monroe often sought out the company of literary types (in fact, she married one.) For his part, Sandburg liked her immediately, as did most people who crossed paths with her. He was also intrigued by her background. Born illegitimate in an era where that was considered foreboding enough, Marilyn (actually, Norma Jean) was eight when her mother had a mental breakdown. She spent the rest of her life in and out of psychiatric wards, while her daughter, the future sex goddess, spent the rest of her childhood going from one foster home to another, getting molested by two of those foster parents along the way. This was about as proletariat as proletariat can get, something the old lefty poet could appreciate. Sandburg and Monroe met at least twice after that, with the photos to prove it. Pictures of Marilyn in dark glasses were taken in the New York apartment of photographer Len Stickler, where Sandburg was staying as a guest, only informing his host of the movie star's arrival when she actually arrived. Pictures of Marilyn in a scarf were again taken in New York, at the apartment of Henry Weinstein, an East Coast producer of plays looking to become a West Coast producer of movies (in fact, the uncompleted Something's Got to Give, starring Marilyn, was slated to be his first.) The photographer was the highly-regarded Arnold Newman. However, he wasn't known for his snapshots, so he too may have been surprised when she showed up. 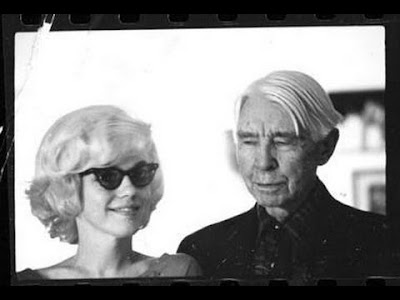 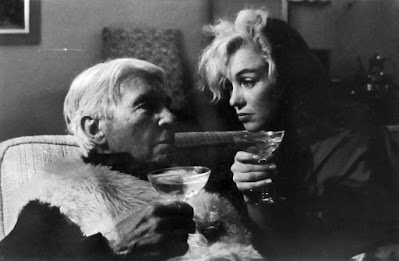 Ooh, these look kind of intimate, huh? Well, rest assured, Sandburg was a happily married man, and besides... 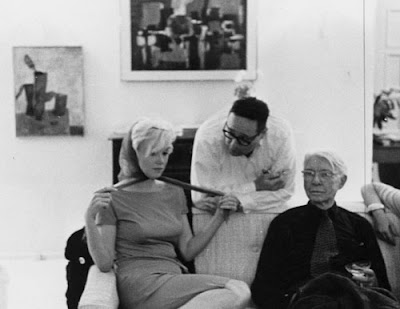 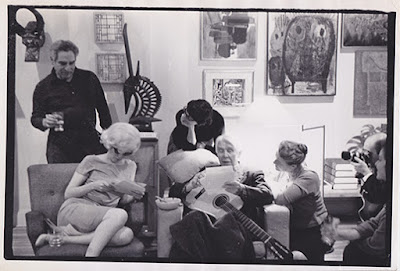 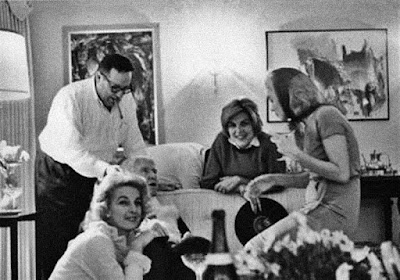 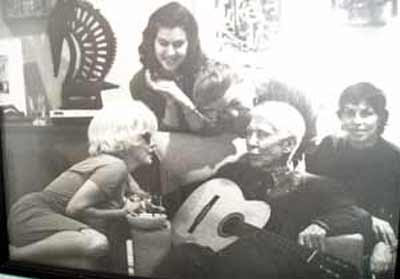 ...there were people present. 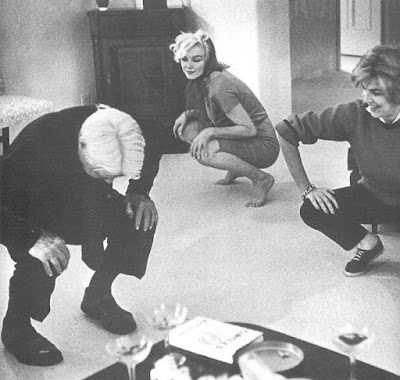 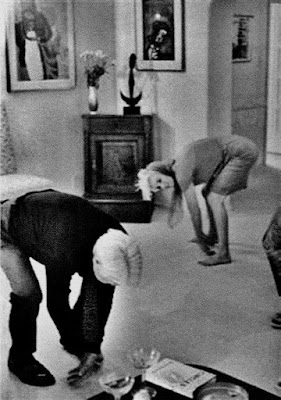 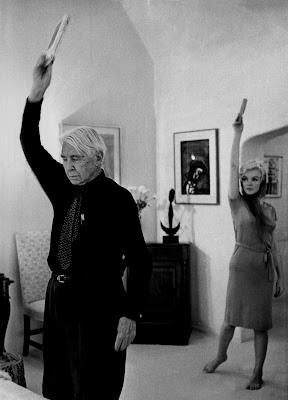 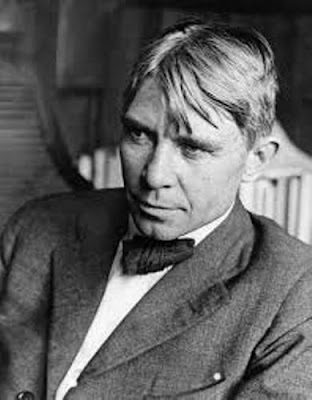 Longtime readers know that as a way of keeping this blog as randomly eclectic as possible, I often pin posts to people's birthdays. So, too, today's is Carl Sandburg's. Here's one of his more famous poems. Nothing political, just mere weather reporting:
The fog comes
on little cat's feet
It sits looking
over harbor and city
on silent haunches
and then moves on
I would have compared it to a hippopotamus, but then, I'm not a poet. 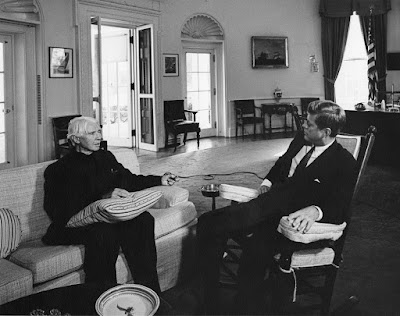 Finally, I don't want to leave you with the impression that Carl Sandburg only hung around Hollywood celebrities. Here he is with the then-President of the United States, John F. Kennedy. Say... 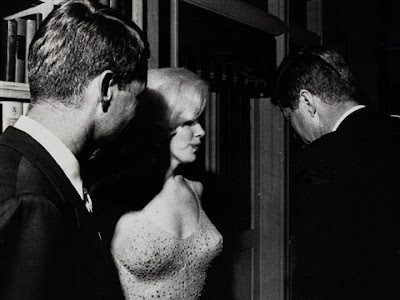 ...you don't suppose Sandburg introduced them, do you?
Posted by Kirk at 12:00 AM