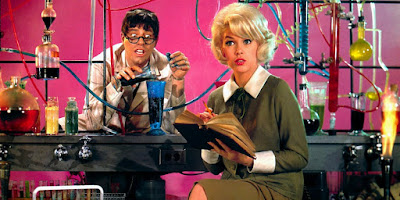 It's National Chemistry Week, and one day out of that week, October 23, is set aside as a holiday. What holiday you ask?

Now, it's not a federally-recognized holiday, so your mail will still get delivered, and, at least in previous pandemic-free years, kids didn't get off from school. In fact, it's an in-school holiday. The following video will explain the particulars.

That woman's charming Southern accent can't quite make up for the dryness of the subject matter. Perhaps we can make it less dry with some interesting visuals:

If you were listening carefully to either of those two videos, you would have heard the name of Amedeo Avogadro, the late 18th-early 19th century Italian scientist who theorized that equal volumes of gasses under the same temperature and pressure will contain the equal number of molecules. Honestly, I can't think of any reason why they wouldn't, but apparently it was something that couldn't be proved at the time. Here's what Avogadro looked like: 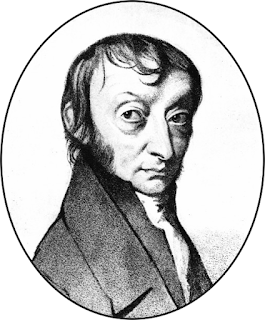 He looks like a bit of a grump, doesn't he? The historical record doesn't say whether he was or not, but he would have had much to be grumpy about. Not only was his theory met with indifference by the scientific establishment, but the University of Turin sacked him after he took an interest in politics--he backed a revolution. He was eventually rehired after everybody had lightened up a bit, including the King of Sardinia (Italy was not yet a unified country, part of the reason for the rebellion.) But getting back to his theory, it increasingly gained favor in the years after his death--I guess you could say Avogadro was the Vincent van Gogh of atomic-molecular theory--especially when an Austrian scientist named Josef Loschmidt used the theory to buttress his own theory concerning the size of molecules. Then in the early 20th century a French physicist named Jean Perrin (by the way, I don't walk around with these names in my head; I only learned of the existence of Avogadro, Loschmidt, and Perrin about a half an hour before I started putting this post together) used Avogadro's theory to buttress--now we come to someone I have heard of--Albert Einstein's theory, not the one about relativity (he had others), but having to do with Brownian motion, or the movement of particles. Amidst all this theorizing a number emerged, 6.02×1023 , and that, my friends, is a mole (symbol: mol), because to write it any other way you'd have zeros all over the place as so many atomic-scale particles can sit on the head of a pin that angels have to find some other place to hang out. And if you look at the tail end of that number, you'll understand why October 23 was chosen as the date of the holiday. But, you know, I think this explanation is getting a little dry, and I don't have a charming Southern accent to make up for it. So lets hear what these young ladies have to say, or sing, about what I just told you:

I wonder if those girls put that video together themselves. It they did, and it's something anybody can do with equipment bought at Best Buy, it makes me wonder why anyone bothers with movie and TV studios anymore. Are they just tax shelters?

I'm sure when you were all going to school yourselves, and attending science class, you saw something that looked like this on the wall: 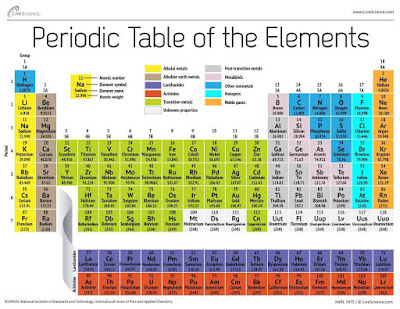 Well, as a way of celebrating Mole Day, student and faculty at Roger Williams University in Rhode Island, got together and--well, see for yourself:

So if you're ever in Rhode Island, and need to consult the Periodic Table, just rent a helicopter, and it will be right there.

Though the above video is of a college, Mole Day is still more of a secondary education thing, designed to get kids interested in science before they get to college. One high school teacher came up with this nifty bit of encouragement:

The message seems to be: study hard, go to college, and once you get out, there'll be a job waiting for you in the Pentagon.

You may be wondering about all these teenage-produced videos. Well, they seem to be extra-credit assignments, such as this one:

Finally, a bit of animation:

Disney by way of Best Buy. 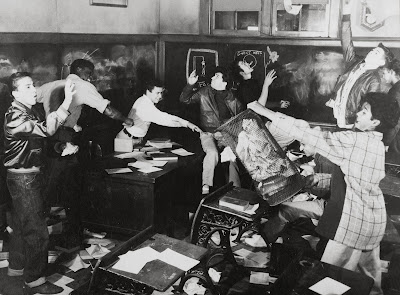 You hear so much in the news these days about teenagers stealing drugs from the school nurse's first-aid station, or  having sex on the wrestling mats in the gymnasium, or setting fire to the World Book encyclopedia set in the school library, or spiking the coffee in the teacher's lounge with Robitussin, or pushing elderly hall monitors down flights of stairs, or--uh, I better stop before I start giving somebody ideas.

The truth is that teenagers, and teenagers' personalities, comes in all shapes and sizes, some good, some bad, and just about everything in between, and it's refreshing to know that there are still high school kids who avail it upon themselves to learn something while in the classroom, such as the ones found in these videos. They are the scientists of tomorrow. Either that, or future contestants on America's Got Talent. 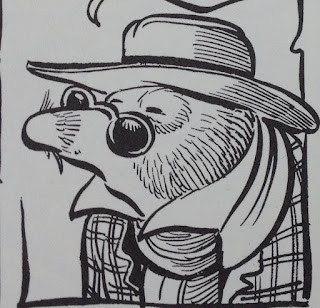 Happy Mole Day. Try not to blow up the lab.