Just Another Word for Nothing Left to Lose


See that man in the overcoat in the lower right of the above picture? He's clearly run afoul of the law, and is now about to receive his punishment in the form of an Alabama State Trooper's billy club. Well, you know what they say, crime does not pay. Except...exactly what was his crime? Did he try to rob that Haisten's in the background, the only company I know of that specializes in both mattresses AND awnings? No, that wasn't his crime. Maybe he tried to mug that man in the middle of the picture, that big dude carrying what looks like a bag (I've blown up the picture to size of the computer screen and still can't tell you what it is.) But no, that's not his crime either. Maybe he tried to rape that kneeling woman in the lower left of the picture. Except then why isn't any of those cops helping her back up on her feet? Blow up the picture, and she looks a little afraid to get up, and it ain't the guy in the lower right of the picture nor that big dude with the bag that she's afraid of. I think we can rule out rape. Lessee, what other crimes are there? Did he rob a bank, steal a car, kick a dog, spit on the sidewalk, or remove a tag from a pillow? No, none of those things. His only crime was exercising a First Amendment right, as he and others had peaceably assembled on a bridge to petition the Government for a redress of grievances. At least it was peaceable until the cops showed up, thus greatly increasing the grievances that needed redressing. 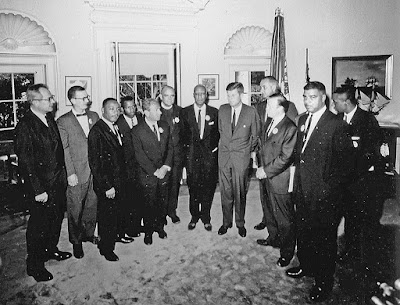 Now, this wasn't the man in the overcoat's first run-in with the law, and maybe not even the first time he got his skull cracked. When he was still in high school he had closely followed the Montgomery Bus Boycott, and made it a point to meet both Martin Luther King Jr. and Rosa Parks, which he did before he had even reached the age of 20. When he was in college, he became one of the 13 original Freedom Riders, seven whites and six blacks who rode several buses from Washington D.C. to New Orleans as a way of testing a Supreme Court ruling that proclaimed segregated interstate bus travel to be unconstitutional. At a stop in Rock Hill, South Carolina, the young man walked into  a whites-only waiting room and got kicked in the ribs by a couple of those whites. Nevertheless, he continued with that Freedom Ride and several others throughout the early 1960s, one of which got him a 40-day stay in the Mississippi State Penitentiary. All this might seem a difficult way to spend one's young adulthood, but he had now earned the respect of many of his peers, and was elected chairman of the Student Nonviolent Coordinating Committee. In that role he became one of the organizers of the 1963 March on Washington, where he made a speech on the steps of the Lincoln Memorial--at 23 he was the youngest speaker that day--and, along with a bunch of other Civil Rights leaders, got invited to the White House  (that's him in the above photo, fourth from the left, and to the immediate right of the aforementioned King.) All well and good. Then, two years later, came that Bloody Sunday in Selma, but even that didn't stop him. By the late 1970s, he had become a member of the Carter Administration. In 1981, he ran for and won a seat on the Atlanta City Council. In 1986 he was elected to the United States House of Representatives, serving Georgia's 5th congressional district for 17 consecutive terms, right up until the day he died. Before that day arrived, however, he had lived long enough to see a black man elected President. He also lived long enough to see that black man succeeded in the same office by a racist, and witness yet another round of racial violence. Live long enough and you get to see the good and the bad, played out in what seems like an endless loop.


In the July 20 issue of The New Yorker, the always-readable academic Jill Lepore has an article about the history of policing titled "The Long Blue Line". Y'all should check it out.
Posted by Kirk at 12:03 AM