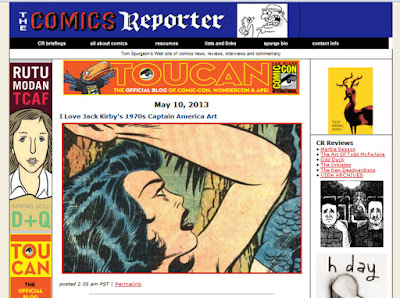 Longtime readers of Shadow of a Doubt should be familiar with a feature that appears here from time to time called "Graphic Grandeur", where I examine the graphic arts, which sometimes includes illustrative work, but more often than not comics, both strips and books, mainstream and alternative. In carrying out this examination, I owe a good deal of gratitude to the above web site, in providing me with informational tidbits about the great cartoonists of past and present, as well the great cartoonists' art itself, which I've happily snagged (Fair use! Fair use! I can't emphasize that enough!) It's not just the information or the art, however; this web site has inspired me. Comics are such an underappreciated art form that it's tempting to ignore it on this blog altogether. Isn't there enough movies and TV shows and celebrity quotes to keep me busy in this space? Why spread myself thin by adding comics to the mix? Well, for one thing I love comics, and The Comics Reporter often reminded me why I love them. The relative popularity of the web site also proved to me that there were people out there who like reading about comics, and even if they don't want to read what I have to say about the subject, they could at least lovingly gaze at a Dan Decarlo-drawn Betty and Veronica cover. Longtime readers of Shadow of a Doubt should also be familiar with the many obituaries that appear in this space. Well, finding out that someone notable died is easy if that person is Whitney Houston or Tim Conway, but when it's a Russ Heath or Carmen Infantino, I don't learn about it from The Huffington Post, The Daily Beast, the TV news, or my local paper but from The Comics Reporter (I was pleasantly surprised once to find a link to this blog on TCR after I did one such obit.) Speaking of obituaries, that's kind of what you're reading right now. Tom Spurgeon, the founder, and I believe the sole reporter, of The Comics Reporter, died this past Wednesday.

Spurgeon was an editor at the print magazine The Comics Journal (where I first encountered his name) from 1994 to 1999, and, after he left that post, continued on at the magazine for a few more writing reviews and conducting interviews. From 1999 to 2002, Spurgeon and artist Dan Wright collaborated on a Wildwood, a comic strip about forest animals with a Christian bent (it never appeared in my hometown paper, but samples I've seen on the web didn't seem particularly preachy. Spurgeon recently endorsed Bernie Sanders for president, so I'm assuming he was not part of the Christian Right.) In 2003, he and Jordan Raphael wrote Stan Lee and the Rise and the Fall of the American Comic Book. The next year Spurgeon and Rapheal launched the aforementioned Comics Reporter, one of the first comics news aggregator sites, featuring criticism (at which Spurgeon excelled), interviews (he was pretty good there, too), cartoonists birthdays, comic-con listings around the country (including Cartoon Crossroads Columbus, of which Spurgeon himself was the Executive Director) and, of course, breaking comics news. There's been no new postings from TCR since Spurgeon's passing, so I have to guess it's not going to survive him. Now that doesn't mean I'm going to stop doing "Graphic Grandeur". I have a couple of posts in mind, including a big one a few days before Thanksgiving. And nowadays there's plenty of online comic news aggregation sites, all of which have have reported on the death of Tom Spurgeon, the man who paved the way.