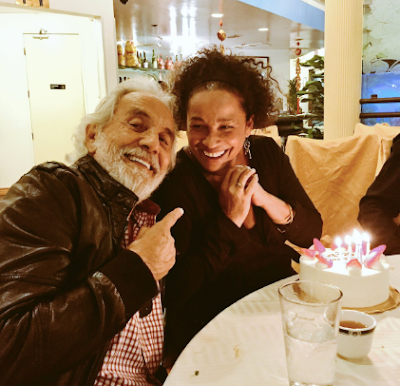 Actress Rae Dawn Chong (above, right) and I were both born in 1961, though her birth was toward the beginning of that year (on this date in fact) and mine took place toward the end. Nevertheless, we were the same age just yesterday, and will be the same age again before the year is out. Unlike other celebrity birthdays, this one doesn't necessarily make me feel older. It normally should make me feel older, since I've seen her in plenty of 1980s movies, as well as a Mick Jagger video, when she was in her 20s, and I was in mine. But I instead feel younger. "Why?" you ask. Look who's on the left side of that picture. Recognize him? Even if you don't, but were around in the 1970s and '80s, you will recall there was another celebrity with the last name Chong. That's right, it's Tommy Chong, of "Cheech and Chong" fame, and Rae Dawn's father. It also means that Chong is old enough to be my father! What so remarkable about that? Well, like a lot of hippies, or people pretending to be hippies, or people who just looked like hippies, I imagined him as not someone old enough to be my father, but kind of my generation, maybe an older brother. That's how I thought of rock stars in general, and though Cheech and Chong were comedians and not rock stars, they had kind of a rock star aura about them, especially given that so many of their comedy routines were about taking drugs. Now that's not something I did all that much of in high school, but at least I could smell the aroma of weed when I walked into the guy's john, after which I had the urge to head into the cafeteria, where the normally unappetizing food served there had suddenly become exactly the opposite.  But getting back to age, when I was in my teens (and Rae Dawn was in hers) I would have assumed Tommy Chong to be in his 20s (in fact he was in his 30s), which means I right now would be in my 40s! See what I mean about feeling younger? As for my own father, he was in fact born four years before Tommy Chong, and for most of his adult life (he died in 1979) wore his hair in a Fonzie-like ducktail, whereas the stoner-comedian wore his hair (and still wears his hair) past his ears. See what a difference being born in 1934 rather than 1938 makes? But that's neither here nor there. I'm still young enough to be Tommy Chong's son, whether I am or not, and you can't take that away from me!

Only the mirror can.