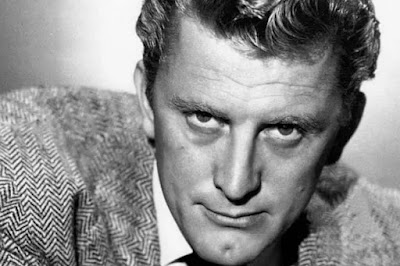 I fell a bit behind this weekend and am unable to give Kirk Douglas the sendoff he deserves. Suffice to say he was one of the most compelling, exciting, and vibrant actors ever to come out of Hollywood. How best to describe his acting style (beyond compelling, exciting, and vibrant)? The man was the closest human equivalent to an active volcano to ever appear on the silver screen, and we in the audience might as well be the city of Pompeii. Fortunately, the analogy stops there or else we're covered with lava. It's enough that we get the wind knocked out of us. A succession of good guy roles later in his career obscures the fact that for a while in the 1950s he was one of the great movie antiheroes, right up there with Marlon Brando, with the added attraction that you could actually make out was Douglas was saying (or hissing.) Good guy or bad guy, his characters lived, and often loathed, life to the fullest. His characters also quite often died to the fullest. Looking at his filmography, I count at least 12 death scenes, and I haven't seen every Kirk Douglas movie so there may be more. About half the time his characters deserved their demises, the other half he played the martyr, but usually not before he killed someone else on his way to his reward. Hey, fair is fair. These were his good guy roles!

I do have enough time this weekend to present you scenes from his various films. So go put on your hazmat suits. Here's Kirk Douglas at his foot-stomping, muscle-flexing, vein-popping, eyeballs-glaring, nostril-flaring best: